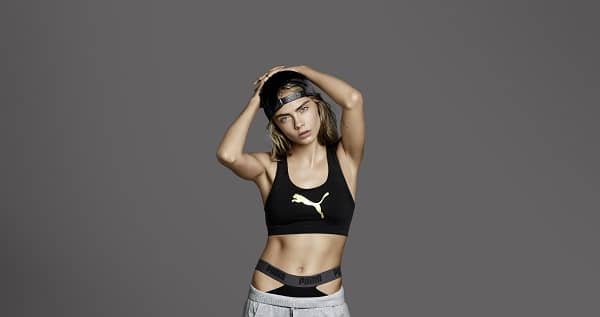 Rihanna is doing an amazing job as Puma’s Women Creative Director. The latest trick up her sleeve was bringing in famous model Cara Delevingne on board. Delevingne, who has been a press favorite for a while now, will star in the “Do You” ad campaign of Puma clothing.

It’s not the first time we see the young celebrity sporting this DGAF attitude, but it’s surely one of the most stylish ones. Also, Delevingne’s close friendship with Puma’s Creative Director didn’t hurt her odds of being cast in the new ad campaign.

“It was effortless to collaborate with her because she’s a close friend,” Delevingne told Fashionista. “I really admire both her business mind and her creativity, so working on this campaign together was a really great experience.”

Delevingne also gave her 34.4 million Instagram followers some sneak peaks. Three days ago, she posted a black-and-white shot of herself – wearing Puma clothing and irreverently blowing a bubble. Since then, the post has long surpassed 1 million likes.

Famous for sporting a tomboyish style, it seems that the model has been preparing for her ambassador role for a while now. Back in January, the budding actress participated in a Funny or Die roundtable discussion on climate change at the White House. On that occasion, she wore a pair of Puma Creepers by Rihanna.

A press release of the clothing company featured Delevingne’s personal opinion of the campaign’s slogan.

“To ‘Do You’ is to take ownership of yourself and finding the power within that ownership — it’s a very powerful statement,” she said. “It’s about accepting who you are, no matter your faults. ‘Do You’ is about finding your truth and sticking to it. I think it’s so special because it means something different for everyone. It specifically encourages people to be themselves.”

For the campaign shots, Cara showed off the versatility of the new Puma collection by hitting the streets of NYC. The first round of imagery published by Puma also features the model-turned-actress in a studio, wearing minimal athleisure and baring a ripped abdomen.

Check out some of the pictures that Puma has already released.

The campaign is expected to launch in late October. More cross-category products will be released through December from Puma’s Running & Training and Sportstyle collections, according to a press release from the brand.

Besides online advertising (on puma.com), the campaign starring Delevingne will also be featured in Puma stores and retailers, as well as outdoor advertising.

Even though Puma’s credit as a fashion brand was already going strong, the move is about to take it even further. Part of the rebranding and category expansion is also the partnership with the New York City Ballet. Puma announced in June that it will become the company’s official offstage outfitter.

However, that’s not the end of it. The Kering-owned company also announced that it has signed more stars for the suede collection. Kylie Jenner is on board, as well as the hip-hop duo Rae Sremmurd, Snapchat star YesJulz, and rapper Young Thug.

The Fenty x Puma Spring 2017 collection has already been outed to the public at the Paris Fashion Week in September. Tidal hosted an exclusive livestream of the show for both members and non-members.

Are you excited about the outfits Cara Delevingne is sporting in these campaign shots? Luckily, you can emulate her style with little effort. Even though the official collection has yet to be released, some of the items are already up for purchase.

If you are fitness-oriented, there’s no way you can miss out on buying this awesome jacket. It features a glossy print Puma logo on the front and a drawstring hoodie in the back. It incorporates dry cell technology, which means no unwanted moisture.

The track jacket also comes with comfortable thumbhole, providing you with protection from this fall’s cold weather conditions. It comes in three colors: Bering Sea, Light Gray, and Dark Gray.

These cute low-profile sneakers could be a fit for any woman who likes comfortable footwear. However, Puma’s new offering also comes with a refined touch in the shape of a sporty retro design. The upper side of the sneaker is made of smooth suede featuring a practical diamond patterning.

All of the available colors give the shoe a dressy and refined touch. You can choose from Coral Cloud Pink/Bronze, Periscope/Pea Coat, Vaporous Gray/White, and Black/Bronze.

Are you proud of wearing Puma clothing? Then this pullover sweatshirt is for you. Ideal for active women (but also for those who just want to feel cozy), this medium-weight pullover comes with a mock turtleneck that you can adjust with drawstring.

If you take sports clothing seriously, then these hipster panties cannot miss from the mix. With their soft and durable fabric, they will maintain their engineered fit for a long time. Also, it’s worth noting these laser cut panties have an extremely small hem, which makes them ideal for wearing under yoga pants.

You can select three different color ranges for the 3-pack offer: Assorted Darks; Purple, Black, and Blue; and Multi-color. All of them have embedded the Puma logo in the front.

Trust Puma to create footwear that stands out from the rest. This sleek, streamlined shoe is both stylish and sporty at the same time. It sports a synthetic leather upper and midfoot saddle that makes sure your feet get maximum comfort. The rubber sole secures your foot perfectly and absorbs impact.

Ideal for cross-training and running. One side of the white show features a Blue Atoll Puma logo; the other presents a stylish streak of the same color.

Check out Puma’s video; it was released with the announcement of the ad campaign. You can hear Cara’s voice in the background, talking about what it means for her to own her body and be proud of who she is.

It’s exciting to see the things Puma (and Rihanna, for that matter) have in store for us. Seeing that Delevingne has become rather selective with the modelling gigs, we are fascinated every time we get to see her again. Indeed, she did a great job as an ambassador for Puma clothing.