It hasn’t always been red carpets, spotlights and glamour for many celebrities as we know them today.

Before they hit it big, many well-known household names had some rather unique jobs to make ends meet. Some may surprise you and some may not. If you feel like your current job isn’t where you want to be, take heart. These celebrity odd jobs may encourage you to keep working hard, and maybe someday you’ll make it big like they did.

Celebrity Odd Jobs -- Before They Were Famous Before turning up the pop industry, Madonna worked at the coffee chain Dunkin’ Donuts in Times Square. Apparently, that wasn’t her dream job and she didn’t last long there.

Throughout high school and college, Madonna excelled on her dance teams. She eventually moved to New York where she continued pursuing a dance career. During this phase of her life, she fell in love with the combination of singing and dancing.

Today, Madonna has done very well in the music industry. In 2008, she was named the world’s wealthiest female musician by Forbes magazine. In addition, she set the record for the most Billboard Top 10 pop songs. Clearly, it was a smart move to leave the coffee and donut industry behind.

“It was a great place to work, but I had a little bit of an OCD thing with hand washing and just didn’t have time. I was not a great employee. I broke the orange juice machine one day,” McAdams said, when asked what one of her celebrity odd jobs was.

So how did she get from taking fast food orders to starring the main love interest in blockbuster movies like 'Mean Girls', 'The Notebook', 'The Time Traveler’s Wife', 'The Vow' and more? McAdams wasn’t a stranger to the spotlight. Until the age of 12, she was a competitive figure skater. Once she discovered her acting passion, she devoted herself to acting in local productions.

After high school, she went on to study theater at New York University in Toronto. Her debut performance was playing a main role in the Disney series 'The Famous Jeff Jackson.' From there, her career continued progressing and leading her to the star she is today.

Long before playing the heart-throb Dr. Shepherd on Grey’s Anatomy, Patrick Dempsey was better known for his juggling skills. The star took an interest in juggling in his teen years, and kept earning money through juggling at birthday parties on weekends. Don’t believe us? Check this video out.

“I came in second in the international jugglers' junior division when I was 12 or 13. I got a plaque. I'm sure my mother has it somewhere,” Dempsey said about his juggling career. Dempsey explained that it was through a school shop teacher where he first started learning about juggling.

“My shop teacher was in this vaudeville group and, to entertain the students, he started teaching people how to juggle, and that’s how it started,” he said.

Dempsey even attended a clown camp and tried to get into the Ringling Brothers Circus. However, he was denied entry – opening the door for him to pursue performing on screen rather than in the circus. He left the juggling and circus life behind and worked his way into theater performance, preforming in several plays like 'Brighton Beach Memoirs' and 'The Subject was Roses'. Dempsey hasn’t left behind this celebrity odd job, though. He got to show off his skills in the movie 'Made of Honor' and is frequently asked about this not so hidden skill on talk show interviews. 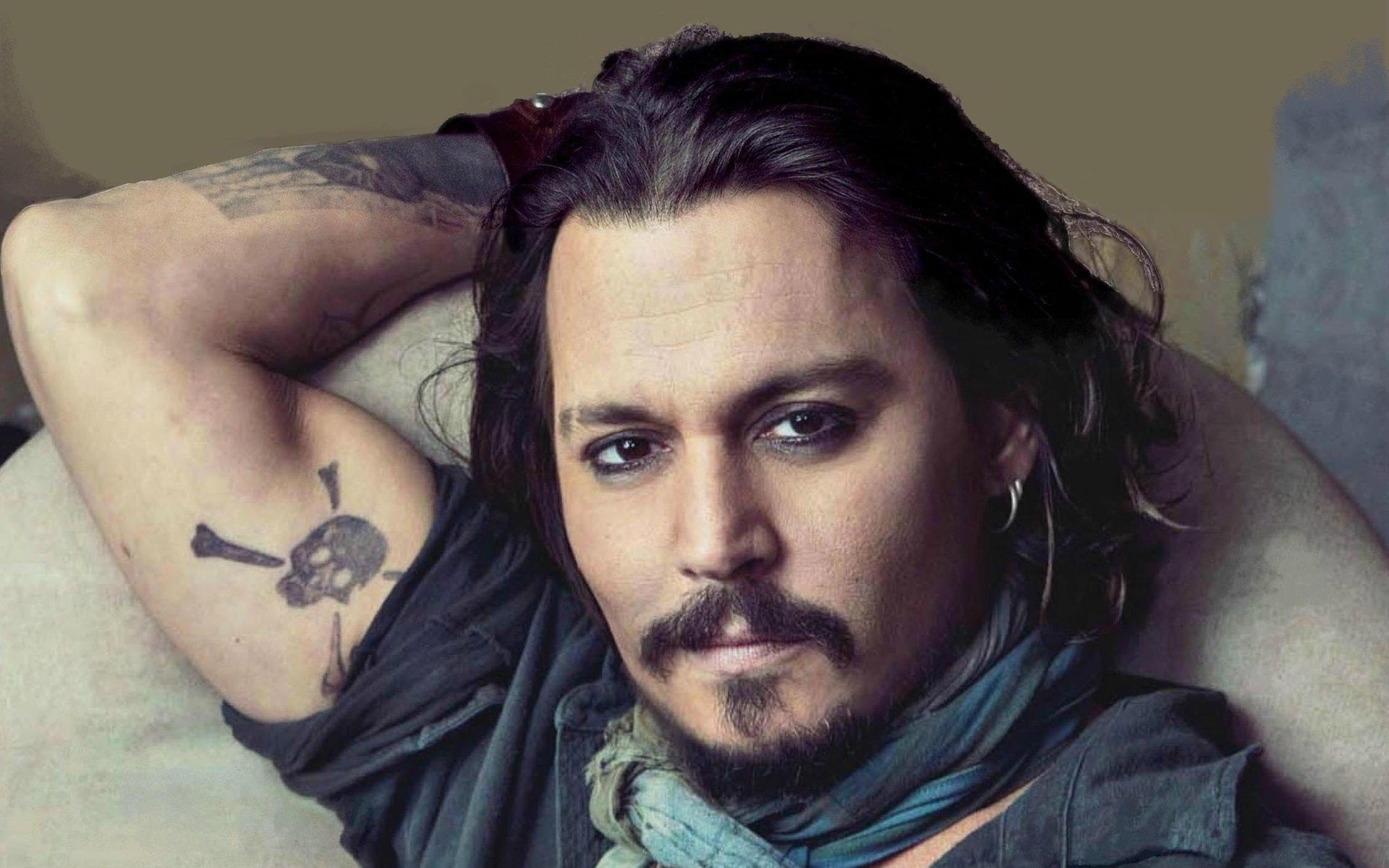 Before becoming best known for fighting other pirates on the big screen, Johnny Depp’s celebrity odd job was selling pens, of all things.

“I marketed pens on the phone. But the beauty of the gig was that you had to call these strangers and say, ‘Hi, how ya doing?’ You made up a name, like, ‘Hey, it’s Edward Quartermaine from California. You’re eligible to receive this grandfather clock or a trip to Tahiti.’ You promise them all these things if they buy a set of pens. It was just awful. But I actually think that was my first experience I had with acting,” Depp said.

How did he go from selling pens to slaying pirates? Depp got into acting when his then-wife introduced him to a friend, actor Nicolas Cage. Cage saw potential in Depp, and introduced the hopeful musician to a Hollywood agent. After several roles as an extra, Depp’s first big break was a role in the horror film Nightmare on Elm Street. It’s all gone up from there. Thanks to those pens for helping our beloved Johnny Depp learn his acting skills.

Known best for her role as Rachel Green on the beloved show, ‘Friends’, Jennifer Aniston has done well making a name for herself as an actress. However, before making it big, her celebrity odd job was similar to Johnny Depp's: telemarketing.

"I was awful, selling timeshares in the Poconos and upsetting people terribly and me just being the worst at it, because I just apologized profusely and hung up the phone," she said.

Once ‘Friends’ ended, Aniston transitioned to starring in movies. She appeared in a number of hits such as ‘Horrible Bosses,’ ‘The Break-Up’ and ‘Marley & Me’. Not sure about you, but we're glad she left behind the telemarketing gig.

Known for her gorgeous good looks, business smarts, and ageless skin, Cindy Crawford is legendary in the beauty and fashion world. However, she hasn’t always been known as the super model and power woman she is today. Her celebrity odd job was working as a corn-shucker at a local fair. (For those that are wondering, the term corn shucking means peeling the ears off of corn on the cob. It’s a commonly used term in the Midwest).

At the time of that job, she was a freshman in college, and only made $4 an hour while doing it. Reports state that was where a photographer discovered her beauty, and from there, the rest is history. As a native of DeKalb, Illinois, it’s no wonder that was her first big job.

“When I was younger, I worked in a corn field, and shucking corn. And I was good at it. I could do it really fast,” Crawford said.

Crawford has more than good looks. After graduating as class valedictorian from her Midwest high school, she studied chemical engineering at Northwestern University in Chicago. Her academic career was short-lived, as she left college to pursue a career in modeling. The tough and competitive world of fashion wasn’t easy to break into, however, getting featured on the cover of Vogue was her big break.

Today, she has signed multi-million dollar endorsements with Revlon and Pepsi, and has held roles in television and films, and is a highly respected spokeswoman for charitable organizations. The Midwestern work ethic and corn shucking clearly served her well as she climbed the ladder of success.

Whoopi Goldberg, who now earns a living by making people laugh as a comedian and an actress, had a pretty eerie celebrity odd job. She was a licensed beautician, but that’s not the celebrity odd job we want to point out. Because of her beautician skills, she worked as a mortuary beautician. Her job was making the dead look more appealing for their send-off.

“I did hair and makeup on dead people,” she told ‘Oprah’s Master Class' in this video. “There was an ad in the paper! And I’m a licensed beautician as well, because I went to beauty school. It’s a rough gig. You have to be a certain kind of person. And you have to love people in order to make them worthy of a great send-off,” Goldberg said about the job.

While working celebrity odd jobs like this one, she was also working on her acting skills. Goldberg starred in a hit one-woman production in the 1980s, and won a Grammy award for Best Comedy Recording. She also had success with film 'The Color Purple', launching her successful acting career.

In the 90s, Goldberg won an Academy Award for her role in the creepy movie 'Ghost'. In 2007, she began a run as a moderator on TV talk show, 'The View'. Today, she is recognized as one of the few celebrities who have achieved “EGOT” status. This means winning an Emmy, Grammy, Oscar and Tony Award. Go Whoopi!

See? It hasn’t always been fame and fortune for celebrities as we know them today.

Everyone has to start their career doing something! These celebrity odd jobs prove that with perseverance and goals in mind, you can achieve what you set your mind to. From McDonald's to cornshucking and everything in between, it's no doubt interesting to learn about celebrity odd jobs. After all, these were a stepping stone that led to bigger accomplishments.