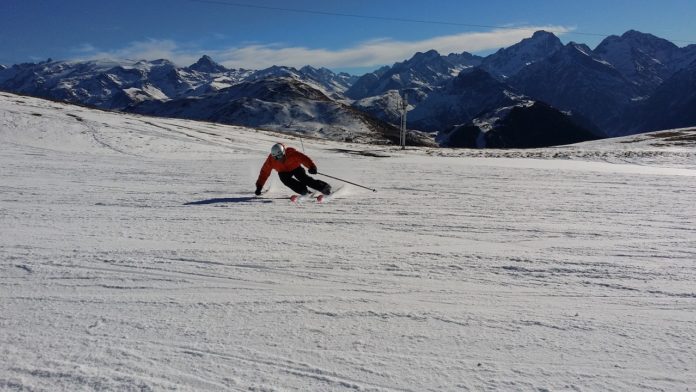 Most of us could probably name a few famous pro baseball or basketball players.

But when it comes to famous skiers, the list is likely a bit shorter. So when one of these elite athletes becomes well known, it's usually for an incredible reason.

Rising to the professional circuit in itself takes a great deal of time and talent. And those who become household names are among the most influential among them. Whether they are technically the best skiers in the sport's history remains up for debate. But since these folks had bigger soapboxes, their impact was larger than most others. Keep reading for the story behind some of the most recognizable names in international pro skiing.

The Most Famous Skiers to Ever Hit the Slopes

Fame is fleeting, and it's usually reserved for those that are on top. But as you'll see below, some stars shine even outside of the winner's circle. There's always a story behind the story, though. And we'll bring you the details surrounding some career peaks that rivaled the mountains they tackled.

The early to mid 2000s saw the meteoric rise of this name. Still one of the most famous skiers among Americans, he dominated coverage of the sport for a while. It really dates back to his performance during the 2002 Winter Olympic Games. He was on home soil as the world gathered to compete near Salt Lake City, Utah.

Pretty soon, fans began to hear more about his background. A natural on the slopes, Miller started out with humble beginnings. He brought home two silver medals from the 2002 games -- but wasn't finished. A few years later, he was still a dominant force in the sport. It was in 2005 that he won the World Cup's overall title. That marked the first time in more than 20 years that an American brought home that honor. And it came with a few amazing achievements behind it.

The same year, Miller became just the second skier in World Cup history to win across the board. Specifically, he won at least one race from all four disciplines. That includes the downhill, giant slalom, super G and slalom.

You can often tell a lot about a famous skier -- or any athlete, for that matter -- by his or her nickname. And with a moniker like The Herminator, you might guess that Hermann Maier was a force to be reckoned with.

This Austrian's World Cup performance is the stuff of legends. In all, he has 54 victories, including an astounding 24 in the super G. He has also racked up more than a dozen wins each in the downhill and giant slalom. Toss in one win in the combined and Maier has more victories than all but one other skier. (We'll reveal that athlete's identity a little later.)

Even after a motorcycle crash nearly killed him, he went on to continue his successful career. It took drastic surgery and a lot of rehab, but he went strong in World Cup, Olympic and other competitions. He brought home two gold medals, and four in all, from two Olympic games. He competed in both 1998 and 2006. Maier was 36 and had been competing in the World Cup for 13 years when he retired in 2009.

Bode Miller's star burned bright prior to an underwhelming 2006 Olympic performance. As his influence was waning after that, Lindsey Vonn's began to soar. She was soon one of the most famous skiers not only in the U.S., but around the world. There are a few reasons her name is among the first most casual fans would mention.

First of all, there's her obvious skill on the slopes. She started a World Cup winning streak in 2008 that really set her apart from the pack. Vonn went on to win consecutive titles that year and the two following years. Her domination made her one of only two female skiers with four championships. You can also point to the fact that she's only one of six women in the sport to win races in all the alpine disciplines. That means she's won the slalom, giant slalom, downhill, super G and super combined.

Then there's her Olympic performance in 2010 and a career that continued into this decade. And in recent years, her frequent appearances on TV and in ads made her a consistent sight. Plus, her personal life -- including a relationship with golfer Tiger Woods -- made multiple headlines.

Here's an Olympic gold medalist whose career was marked by some serious injuries. But she continued to push through and create her own legacy in the demanding sport. She was victorious in the 2006 Winter Olympics, bringing home the gold for America.

And four years later, she added even more Olympic medals to her collection. She won the silver in the downhill and the combined races in 2010. In 2014, she finished third in the combined, bringing home a bronze medal for the U.S. With four medals in total, she has more hardware than any other American alpine skier.

Her professional victories also spanned into the World Cup and World Championship circuits. In the former, she won a total of seven races. And she has five World Championships medals under her belt -- two silvers and three bronzes. She experienced pain and needed surgery for hip issues. She might not have the name recognition of some other famous skiers, but it's clear that she's very well known. The combination of her dominance on the slopes and her inspiring personal story justify the fame.

Sometimes the most famous skiers would have been famous with or without the sport. That is certainly the case with Vanessa Mae Vanakorn Nicholson, who made a name early as a violinist. In fact, she became the United Kingdom's wealthiest entertainer under the age of 30.

That was in 2006, and her alpine skiing career hadn't even begun. In 2014, she competed in the Winter Olympics. At that time, she was known as Vanessa Vanakorn, using her father's last name. She competed for Thailand, acknowledging that she would have a tougher time representing the U.K. Her father's home country allowed her to compete and she was one of two to ski for Thailand.

Unfortunately, her appearance became mired in controversy. There were allegations of corruption stemming from a qualifying race she competed in. After a preemptive ban following her performance, the Court of Arbitration for Sport reversed it. That body said there was insufficient evidence that she was involved in any wrongdoing.

It might be understandable if this isn't a name that rolls off the tongue. Many who love the sport might not be familiar with all of his feats. But Ingemar Stenmark is one of Sweden's most celebrated athletes -- and for good reason. We mentioned The Herminator already, noting that he was second to only one in the World Cup. But we didn't tell you how big the gap is.

Stenmark's incredible 86 wins is a record that stands more nearly four decades later. Keep in mind, Meier is number two with 33 fewer wins. And those wins came at a higher price. This was an era in which the disciplines of the super G and combined weren't yet added. He won every year from 1976 to 1979. The last two years were especially strong performances. Both seasons, he won each of the giant slalom races for an incredible undefeated streak of 17.

His career was dominant in other ways, too. He translated his winning streak to the 1980 Olympics, where he brought home two gold medals. His name has gotten -- and deserves -- recognition the world round. But in Sweden, his is on a short list of the nation's most celebrated athletes. His impact on the sport is legendary and he set a standard even the most famous skiers are still chasing.

Canada has plenty of picturesque peaks to navigate on skis. And it's produced some great champs. But one of the most famous skiers to emerge from the nation's pool of talent is Robbie Dixon. He hails from North Vancouver and joined the World Cup circuit in 2006. Two years later, he placed fourth in the World Cup super G in Norway.

He competed the next year and finished fifth, following up with an Olympic appearance in 2010. Though he didn't bring home a medal, Dixon remained a household name in his country and beyond.

Austria produces more than its share of famous skiers. And here's another one. Anna Veith has been on the international skiing radar since 2006. She was only 17 years old at the time. And her World Cup career was just getting started.

Veith made a name for herself by competing in a variety of disciplines. For much of her early career she was competitive in all five. During that period she ranked as the world champion in the super combined. Later in her career, she competed in the 2014 Winter Olympics in Russia. That's where she got her first Olympic medal, a gold in the super G. She went on to claim the World Cup titles in giant slalom and overall the same season.

Whether you're a veteran on the slopes or have never put on a pair of skis, you might recognize these famous skiers.

That's because raw talent, media appeal or a combination thereof led to an abundance of coverage. But being the most famous in any field isn't always the indicator of success. There are many great skiers who have earned recognition in their own way, even if you couldn't name them.

We hope our list has helped you identify some of the sport's biggest names. If so, share this article with the alpine fans in your life. And leave us a comment below if you have any final thoughts or questions.

Related Article: Courchevel: Home of the Best Restaurants in the World