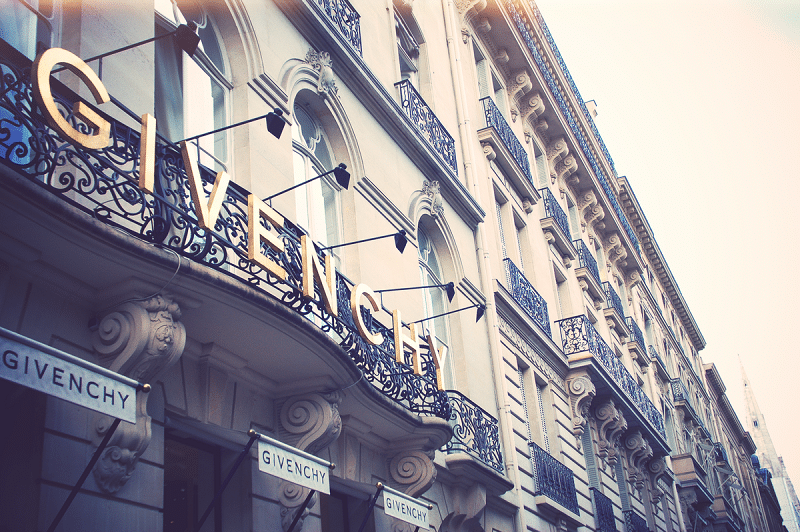 Everyone and their sister has heard of the French brand Givenchy, whether through their haute-couture clothing, perfumes, accessories or cosmetics. Started in 1952 by French designer Hubert de Givenchy, the house of Givenchy is owned by the LVMH luxury group, as well as a member of the Chambre Syndicale de la Haute Couture et du Prêt-à-Porter.

The House of Givenchy

Hubert de Givenchy started his own luxury house in 1952 when he also launched its first collection Les Séparables. Using raw cotton, Givenchy created some superb floaty skirts and puffy blouses that quickly attracted the eye of celebrities. The collection also brought Givenchy critical acclaim; Vogue magazine praise the “wonderful first collection” which included the Bettina Blouse a white shirt named in honor of Bettina Graziani. René Gruau even immortalized the shirt in one of his paintings.

The launch of the House of Givenchy was also marked by an article in The New York Times magazine. Entitled “A Star Is Born,” it created even more media buzz around this young yet promising fashion house. Famous models, including Ivy Nicholson, Suzy Parker, and Dorian Leigh, soon became the faces of Givenchy and muses of the house. In terms of innovation, the designer used ‘shirting,’ a raw cotton similar to pattern paper, to create casual and chic collections.

In 1954, Hubert de Givenchy presented the first shirt dress. Three years later, it evolved into a sack dress that became a sort of staple for the designing house. Hubert was the first designer of high fashion to create a luxury ready-to-wear clothing line. It was called “Givenchy Université” and it was produced in Paris using U.S.-imported machinery. Before he signed for this new collection, Givenchy bought all of his fashion house’ shares back from Louis Fontaine.

The first years of the House of Givenchy did indeed attract the public’s attention, but the next decade really propelled it into the spotlight. In 1969, Hubert de Givenchy released a new fashion line, this time for men, entitled “Gentleman Givenchy.” He also opened a boutique on Avenue George V., in Paris. Later the same year, Hubert de Givenchy introduced the short dress.

In spite of the many luxury products with the Givenchy logo on the market, it is clear that the Haute Couture collections are the heart of the fashion house. In the seventies, Givenchy developed his licenses to protect them, while also designing a new collection of embroidered coats in honor of Joan Miró and Georges Braque.

During the same period, the House of Givenchy started diversifying its activities, creating shoes, upholstery, ties, jewelry, tableware, and kimonos. Hubert de Givenchy was also chosen to design the interior of Hilton Hotels around the world, as well as the luxury car Lincoln Continental Mark V. In 1976, Givenchy Inc. – both offices and showrooms – made their arrival on New York’s popular Fifth Avenue.

Later on, Hubert de Givenchy was awarded the title of “The Personality of the Year 1979,” as well as “The Most Elegant Man of the Year” by The Best Magazine. In 1982, the Fashion Institute of Technology of New York organized a retrospective of Givenchy presided by Audrey Hepburn. In 1985, Jacques Lang, the French Minister of Culture, offered him the Oscar dedicated to the art of elegance in the context of an elegant celebration at the Opera in Paris.

In 2005, the designer reins were passed on to Riccardo Tisci, with his naming as Artistic Director of Womenswear. Tisci’s legacy consisted of conserving the architectural lines and the aristocrat elegance of the house while also influencing it with his style. During his time at the helm, Tisci also added some dark and sensual romanticism touches. He extended the chromatic palette of the house and included flashy colors, such as red blood, baby blue, metal, wildlife and floral prints. His designs are famously structured, uncluttered, and graphic.

The current chief operating officer at Givenchy is Sebastian Suhl, the former chief operating officer of Prada S.p.A. A number of celebrities have worn Givenchy designs on red carpet occasions, including Rooney Mara at the 2012 Academy Awards. The designer house also worked with Madonna for her Sticky & Sweet tour, as well as the 2012 Super Bowl Halftime Show. In 2016, Tisci collabed with Nike on a sportswear line called “NikeLab x RT: Training Redefined.” The collection was aimed at the Olympic athletes competing in the 2016 Summer Olympics, as well as everyday gym users. In February 2017, Riccardo Tisci announced he was leaving Givenchy. 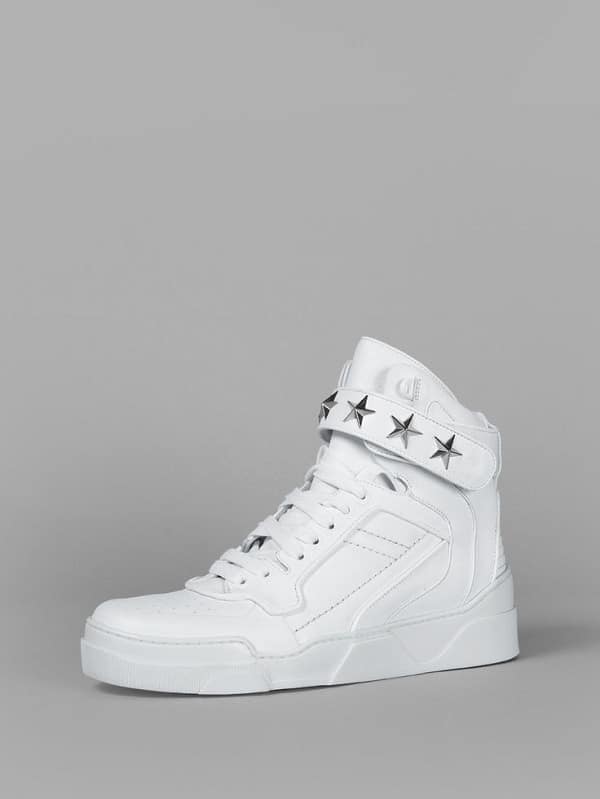 Today we focus on Givenchy shoes, presenting you with some of the most popular options available. We scoured the internet, read the reviews, and compiled a list with both affordable and extremely luxurious shoes designed by Givenchy. For your convenience, we have also added links to online stores where you can find these bad boys.

These Givenchy sneakers are not just really comfortable, but also ready to take on the city streets in style. With their chunky white sole and smooth white leather, they are the perfect addition to any casual look. The gold-tone logo stamped to the heel is a fine touch, as well the knotted details. Pair them with leather leggings to rock your outfit. The upper side of the shoe is calf leather, while the insole and the lining is comfy leather. The white sneakers are made in Portugal.

Another white pair of shoes on our list, these ankle-high buffed calfskin boots are a must-have. Featuring hemisphere stud detailing throughout and an almond toe, they instantly give your look a boost. In addition to the four straps in black sporting a logo-engraved pin-buckle fastening, the boots also have high-quality leather midsole. The stacked leather heel is also logo-engraved. Add to the combination silver-tone hardware and tonal stitching and you have the perfect boots for an elegant occasion. Made in Italy.

Durable, sturdy, and no nonsense – these three words best describe Givenchy’s Chain ankle boots. They’re not just practical, but also polished, featuring a 5 cm heel for a little comfortable elevation. The shiny silver-tone hardware comes in high contrast with the smooth black leather. Too tough a look for you? You can always temper it with a printed summer dress. Round-toed, zipped back, and made of calf leather, these cute boots should not miss from any fashionista’s closet. It’s made in Italy.

Summer is just around the corner, which means you have no reason not to buy these amazing Givenchy Retra sandals. While also available in red, the brand has also updated the model in smooth army-green leather, so you can be ready for the new season. Skillfully crafted in Italy, this classic pair features suede ankle straps and a mid-heel (approx. 3 inches) that’s comfortable enough for all-day wear. You can style your pair with anything, including cropped denim or a little black dress. The buckle-fastening strap means the sandals are tightly secured on your ankle, offering you the support you need throughout the day.

For Givenchy’s SS17 collection, Riccardo Tisci drew on the spirituality of nature. The items echo themes from the labels FW16 collection, while also taking them to a new level. In addition to Givenchy’s signature black, the feminine silhouettes combined with geometrical tailoring will surprise you. Givenchy’s red leather and kid leather Shark Tooth open toe ankle boots feature the brand’s embossed insole, silver-tone hardware, a side zip fastening, a twist lock fastening, an ankle strap, a shark tooth motif and a high yet comfortable stiletto heel. The shoes are made in Italy.

Get ready for the new season with Givenchy signature slip-ons, now upgraded with a dose of luxe appeal. The plush mink fur upper intermixes perfectly with the black design. The sandals feature logo embossing at the side of the foot, allowing your admirers to subtly recognize who you’re wearing. Style your fur slip-ons with a pair of cropped trousers for maximum effect.

Givenchy’s legendary shark-tooth fastening gives these Shark 125 nude-pink leather sandals a tough-luxe appeal. The understated pair of shoes features a slender heel for a statement-making edge. Calf leather for the upper side, leather for the lining and the insole, these gorgeous babies were carefully crafted in Italy. Wear yours as a bold finish to sleek dresses.