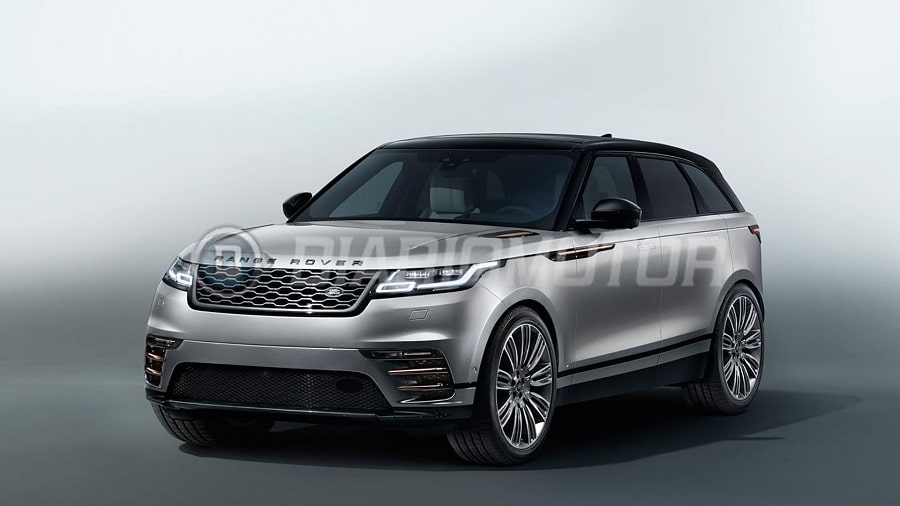 Range Rover has teased us about unveiling a fourth model in its luxury SUV line, the Range Rover Velar. Even though the carmaker has revealed only one official image, we have been gifted with a full set of images of Land Rover’s new Range Rover Velar sports crossover. The pictures have made their way online courtesy of Diariomotor, prior to the official Geneva Motor Show world premiere in a week’s time. Based on the visual clues we’ve been given so far, the new Velar features a sports coupe design influence, similar to the BMW X6 and the Mercedes-Benz GLC Coupe.

What We Know So Far

Expectations for the Velar run high, both globally and locally. According to Land Rover, the Velar is supposed to fill the gap between the most affordable Range Rover – the Evoque – which starts from $41,000, and the Sport, which goes from $65,000 and up. It suggests the starting price for the Velar would be near $70,000. The carmaker says the vehicle’s name comes from 26 Range Rover preproduction prototypes of 1969 that engineers wanted to hide from the public. That’s why the company used the Latin velare, meaning to veil or cover.

“We call the Velar the avant-garde Range Rover. It brings a new dimension of glamour, modernity and elegance to the brand,” said Gerry McGovern, Land Rover’s chief design officer. With a guarantee that it will be “refined for every occasion, for every terrain, Velar uses unique sustainable materials and advanced engineering to continue Land Rover’s drive to go ‘above and beyond,” he added.

Market analysts expect Range Rover’s new Velar five-seat SUV to increase the brand’s appeal to female buyers in Australia, just as the F-PACE wagon has for Jaguar. Rumor has it that, beyond the Porsche Macan, Land Rover will try to steal buyers from the upper end of the BMW X4 and Mercedes-Benz GLC Coupe models, as well as the BMW X6 and Mercedes-Benz GLE Coupes.

Range Rover Velar: In & Out

Based on the new gallery that followed Land Rover’s single teaser photo in February, the new Range Rover model features a familiar exterior styling, influenced by both the Evoque (up front) and the Sport (the rest of the body). However, the Velar is definitely more rounded and presents softer lines than either one, as well as a more rakish roof.

While sporting similar lines to the other Range Rover models, the inside of the Velar takes the brand’s design further by proposing two ultra-wide touch screens. One is designed for the infotainment system in the upper console, while the second one is placed right under. The lower console display retains three physical knobs for controlling the air conditioner.

“If you look at the people who are in that space and buying cars in that space, a huge number of them have some form of female influence and a big number of them are genuine female drivers and buyers,” said Managing Director Matthew Wiesner. “It is the answer that Evoque started to provide [Range Rover], but Velar takes it to another level … We see it as a great opportunity to fill that gap. Not only has it got sharp design and dynamics – which will become very apparent – it’s also got space and performance.”

Velar Competes with the Big Guys

The new Range Rover represents the car manufacturer’s determination to create a model that’s more off-road capable than its rivals’, including the BMW X6 and Porsche Macan. Therefore, the natural conclusion is that the Velar is less likely to offer rear-wheel drive from mid-year. According to Wiesner, the ultimate goal is to position Range Rover in the same league as Jaguar.

If all goes well, it will come down to “Will I drive a Jaguar or will I drive a Range Rover?” Hopefully, the specs of the Velar will be enough to help wavering drivers make a clearer decision. At the endo of the day, Range Rover just wants to create the right noise – from a brand point of view. Wiesner said the company is OK with customers simply becoming more interested in the luxury range of cars produced by Range Rover.

In spite of wanting to compete in a higher league, Range Rover’s main competitor is Jaguar, its sister brand. Under the same corporate umbrella, the two brands are the biggest challenger for one another, which means customers could be wandering around the showroom and choose a Velar instead of an F-PACE. Whatever the choice, the company wins.

“Keep in mind three years ago the risk was the other thing you might have been looking at was somebody else’s stable and you left completely and didn’t come back. And that’s been the issue for this group for quite a long time,” added Wiesner.

Once the supply constraints relax, the Velar could become Range Rover’s top-selling model in Australia. Wiesner predicted this could happen around 12 months into its production. The Range Rover Sport was the top-selling Range Rover (3099 sales) in 2016, narrowly ahead of the Evoque on 2732. Velar will soon take up the fat spot in the SUV category, continuing the company’s growth in the broadly medium luxury premium segment. Once the supply versus demand settles down, market analysts will get a good indication of the definite situation between the Sport, Velar and Evoque.

Below you will find a short review for the most popular Range Rovers available on the market. If you want to compare specs before the official specs of the Velar are released, here is your chance. Do you think the Velar could be all Land Rover hopes it will be? Talk to us in the comments below.

The 2016 Land Rover Range Rover has ranked very high within the Luxury Large SUVs category. It caters to every driver and every conceivable need by providing its clients with luxury and off-road prowess. Thanks to the 340-hp supercharged V-6—with four-wheel and an eight-speed automatic drive—the original Range Rover offers a decent compromise between power and efficiency. And let’s not forget about the 254-hp turbodiesel V-6 with 440 lb-ft of torque. Whether standard or long wheelbase, the models are equally posh, especially in Autobiography trim. They feature plenty of the latest tech, adding to the expensive final product. The Rover may be imposing, but few others can match this status symbol’s panache.

Riding on the most capable suspension and decorated inside like Balmoral Castle’s library, the Range Rover is serene, superbly refined, and utterly elegant. The base V-8 makes 510 HP and 550 HP is optional. However, both engines mate to an all-wheel-drive system that features plenty of adjustments and an eight-speed automatic transmission. If the standard-wheelbase model is not enough for you, choose the long-wheelbase model, which comes with an added 7.3 inches of rear legroom. 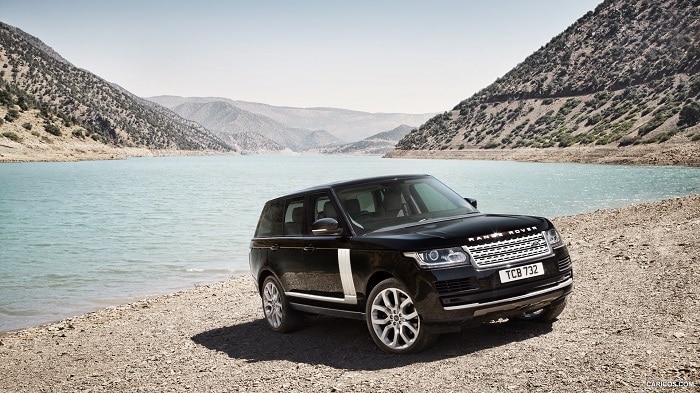 Featuring a bolder design than any other Land Rover, the Range Rover Sport SVR thrills all the senses. Thanks to Land Rover’s all-aluminium monocoque body-shell technology, the SVR enjoys a strong, stiff structure. On the other hand, the vehicle’s lightweight architecture complements the structure, leading to greater performance. Composed and confident, the SVR simply demands your attention. But wait – there’s more, because everything about Range Rover Sport SVR has been taken to a whole new level.

The switchable Active Sports Exhaust system comes with a two-stage active exhaust, beautifully manufactured with its electronically controlled valves. The result is a throaty sound allows a more impressive flow through all four exhaust pipes as the valves open with increasing engine speed. It also incorporates purposeful modulated pulsing at lighter throttle openings. Without any abrupt change of character, the changes enhance the sound even further. 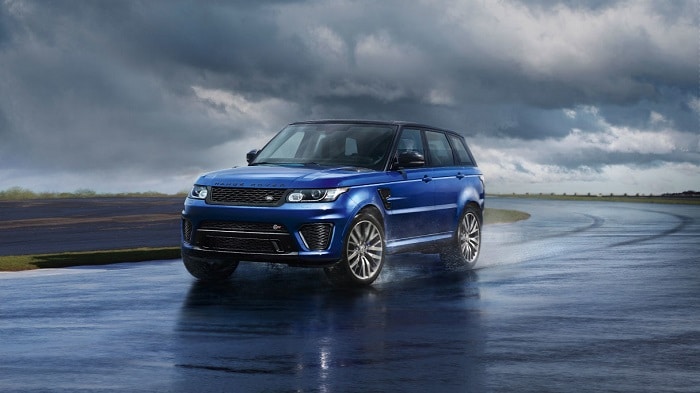 With its muscular shoulder, surprising lines, and tapered roof, the Evoque sets itself apart from its siblings. Whether you’re looking to discover hidden parts of town or looking to be seen in all the right places, Range Rover Evoque is always ready for action. The carmaker created the perfect balance between capability, distinctive exterior design, a contoured cabin, and performance. The magnificent result is a big seller that defined contemporary city life.

The distinctive look combines with adaptive full LED headlights with enhanced light output for better visibility and safety at night. The headlights also enhance the vehicle’s design cues, while the adaptive function automatically aligns the light beams with steering inputs, following the road’s curves. Another distinctive signature is the Daytime Running Lights (DRLs), which also serve as the directional indicator.