Khakis: A Staple in Almost Every Guy's Wardrobe

But as common as they might be, the term is still widely misunderstood. So what are khakis? Well, that kind of depends on who's asking. But we will look into the history of the catchall term to give you a complete look. Whether you wear them every day or you're just curious about their roots, we'll give you the details. But we should start by noting that the word started as a description of a color. And, as you probably already know, that color is something close to the hue below.

Table of Contents
Khakis: A Staple in Almost Every Guy's Wardrobe
What are Khakis? Multiple Answers to a Common Question
Examples of Khakis We Love
Khakis Remain Popular For Good Reason

What are Khakis? Multiple Answers to a Common Question

So we've determined that khaki refers broadly to a color in the light tan category. That word originates in Urdu. Depending on context, it can be used to describe the color of soil, dust or even excrement. But in our common use, it reflects just the color in any context. It began to make a leap to mean some type of men's garment in the mid 19th century. At least that's what most common lore says. 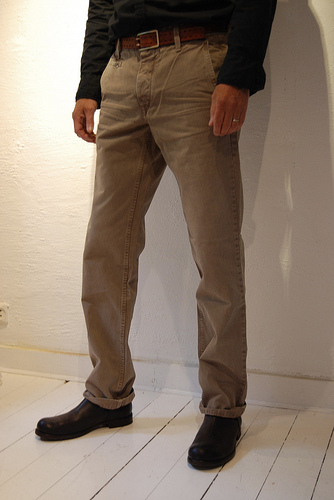 Khaki might have originally been coined as a way to describe a number of common colors. But as you already know if you've been to a men's store, it now means a lot more. You can actually pinpoint the transition of the term to a military officer's discovery nearly 200 years ago.

In fact, most folks point to Sir Henry Lawrence for starting the entire movement. You might have noticed that military uniforms are often khaki colored. Well, that's part of the story.

According to the tale, Lawrence was a British soldier stationed in India at the time. Wanting a more comfortable way to dress in the heat, he took a bold step. He dressed in his pajama bottoms and either dyed them or caked them with dirt. Then, they matched the color of his uniform while giving him more lightweight pants.

So what are khakis? Turns out, they were just like most great inventions -- created out of a common need. And generations later, guys are still staying cool, comfortable and stylish as a result of his creation.

Is It a Color, a Style of Pants, or Both?

The easy answer is that khaki often refers to either the color or the type of men's pants. You can generally tell which is which by the context of the conversation. For example, many tan colored women's clothing is referred to as khaki.

On the other hand, if you're talking about menswear, you're probably not going to need to differentiate. When most guys go out to buy a pair of khakis, they're talking about the type of pants. These comfortable and light pants are also commonly called chinos.

How Are They Characterized?

What we typically refer to as khakis these days actually goes beyond either the color or style. So you might find yourself asking the same nagging question: What are khakis?

Again, that depends. We're referring to the type of comfortable garment that resulted from Lawrence's invention. And that often morphs into what the fashion industry uses to describe the fabric used. You probably know the type. It is tough, easy to wash and even easier to wear.

Examples of Khakis We Love

Perhaps the best part of how popular khakis remain is that they are easy to find. And with so many designers competing for a slice of the market, consumers win. We've found a few of our favorite khakis to really show what is available. So, what are khakis? Click on a pair you like and find out for yourself!

If you want to do business casual right, these pants offer a great option. Robert Graham has developed these all cotton khakis for comfort and style. You can see the fine craftsmanship and materials from first glance.

And when you put them on, there will be no mistake. They are classic fit and the right size will feel great on just about any body shape. Really, what are khakis if not a great opportunity to wear versatile pants with multiple outfits. And these make you want to look for even more chances to put them on.

Bill's Khakis has been making a name for itself among makes of high end khakis. As its name implies, this type of clothing is the company's bread and butter. And it shows.

We think these U.S. made pants are some of the most comfortable and toughest we've seen. There are plenty of styles available from the company. But the fashionable twill and cotton construction makes this pair stand out from the crowd. Plus, you can toss them in the washing machine and wear them again. These are very wearable and can be worn any day and just about anywhere.

We've already discussed that khakis are always a good alternative for casual wear. But when you really want to lay back, nothing matches a nice pair of shorts. Unfortunately, some options come across as a bit too casual. They might look (and feel) like cheap garments.

But if you've ever worn Tommy Bahama clothing, you know you can expect quality. And these are some of the most well crafted khakis we've seen. They are luxurious enough to match your lifestyle but casual enough for everyday life. Almost every guy needs a pair of khaki shorts in their closet. We think these are about the best out there.

It is rare that a particular style of clothing remains fashionable for generations. But with something as comfortable as khakis, it shouldn't be surprising. Not only can you rely on them to be easy to wear, they go with almost anything. Any piece of clothing that is so useful must be important. If you came here asking "What are khakis?" we hope you found a satisfying answer.

If so, share this article with the fashionable folks in your life. And leave us a message below if you have any final questions or thoughts.

Related Article: How to Wear Boat Shoes for Any Occasion and With Any Outfit