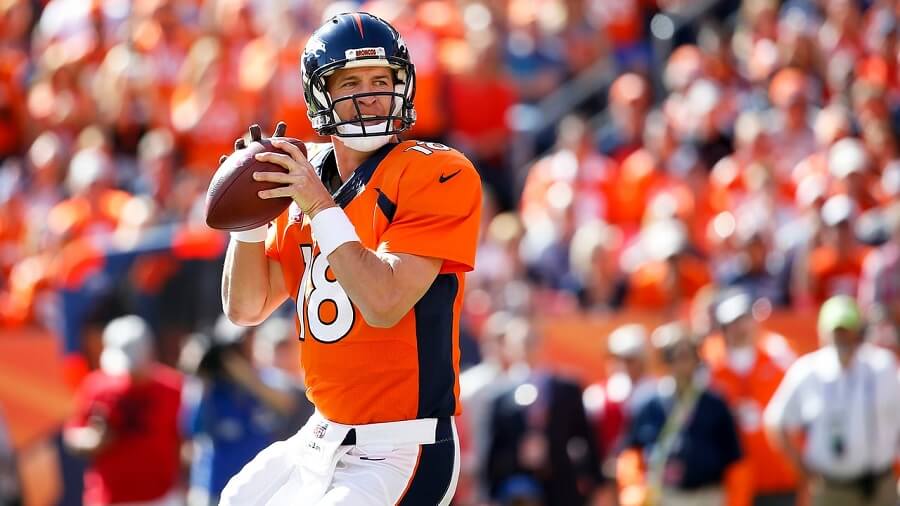 Whatever Broncos Peyton Manning touches nowadays, he turns to gold. And we’re not only talking about his 55 touchdown passes and more than 50,000 regular-season yards spanning a legendary 18-year NFL career.

The quarterback has just sent ripples of astonishment among a nation of fans when he announced his decision to retire after almost two decades in the Pro Bowl league. The news also saw signed pieces of Peyton Manning memorabilia skyrocket all the way to the high-end of the market.

Any Broncos fan who’s acquainted with No.18’s achievements throughout the years will not be surprised to find a large collection of gear and apparel sporting the hero’s signature. However, just in case you’ve lost track of all those touchdowns, here’s a short history lesson about who Peyton Manning is.

An all-time Pro Bowl choice ever since his rookie years, the football player led the Indianapolis Colts to a Super Bowl championship in 2006. In the four years with the Denver team, Manning launched a golden period for the Broncos. They achieved AFC West division titles, one World Championship, and appeared twice on the Super Bowl scene. A month after capping his career with a second Super Bowl, Broncos Peyton Manning is in line for the Hall of Fame.

In the aftermath of his retirement announcement, his collectibles are selling like hot dogs at the Super Bowl. Now you can grab the newest autographed mini helmet, a signed football to play with your kid in the back garden, or a Nike T-Shirt where Manning’s name couldn’t look more neighborly next to the three immortal words: ‘Just do it!’

To prevent duplication or fraud, all of the below luxury collectibles carry a Steiner Sports Certificate of Authenticity and come with a tamper-evident security seal Hologram. 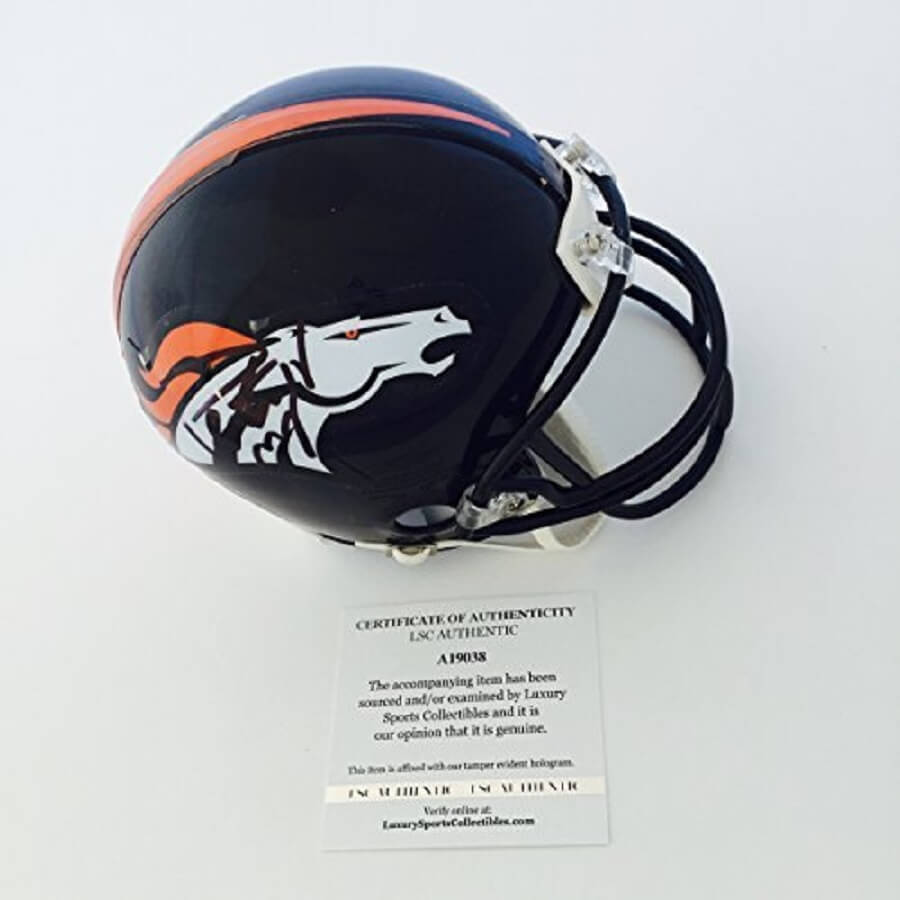 > weighs heavy in any collection. The item is a symbol of the Bronco’s sensational 2015 season. Then, the Denver team scored a 24-10 victory over the Carolina Panthers in Super Bowl 50 on Feb. 7, 2016. 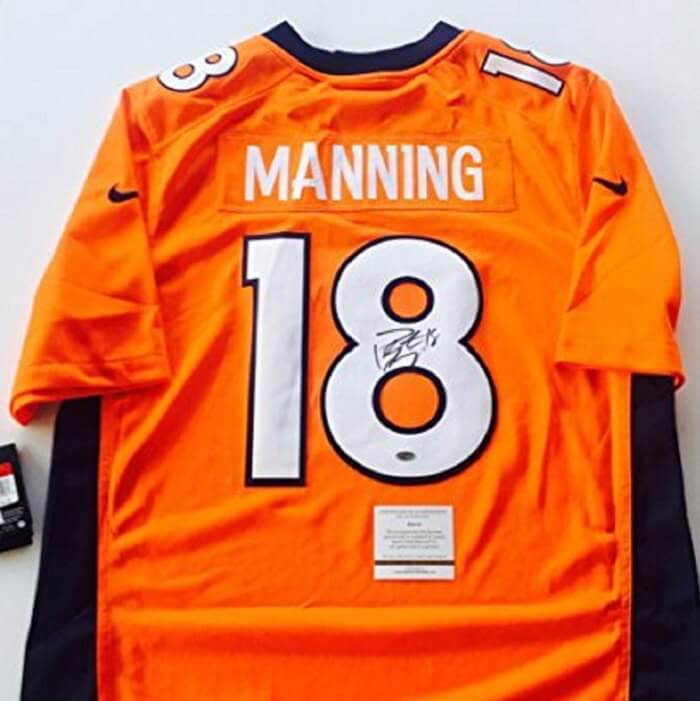 There’s no statement as a T-Shirt statement. Let everyone know what your favorite number in this year’s Super Bowl is with the Broncos Peyton 100 percent cotton short-sleeve T. The item is iron-clad LSC authentic.

Finally, after you do your own sweating over a spectacular touchdown, don’t worry about throwing it in the washing machine. The signature is imprinted forever in waterproof ink. 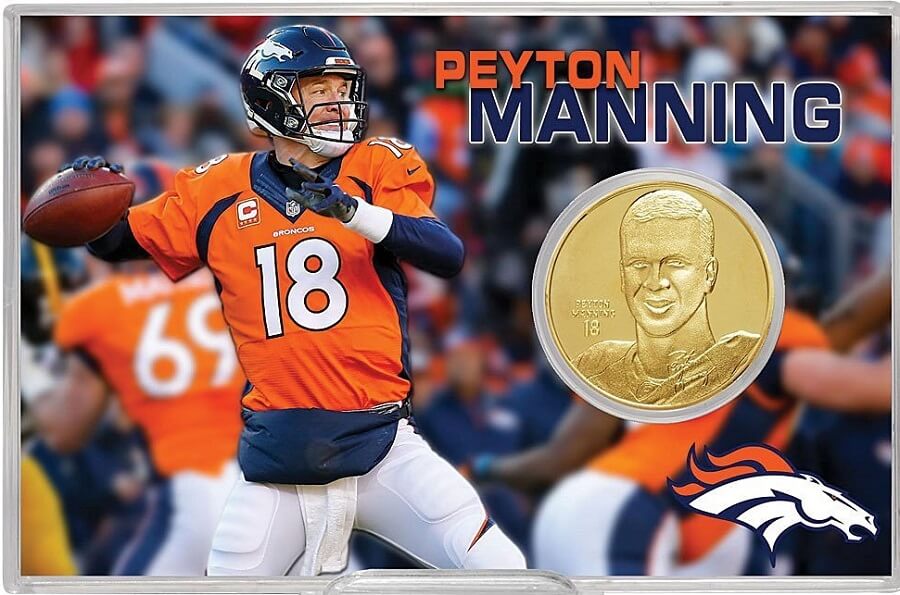 Who knows? The tides of the economy are so fast-changing there might be a future time when Peyton Manning coins become valued currency. For now, though, it buys you priceless memories from your favorite Super Bowl.

The bronze coins feature a size of 39mm, a gold-plated surface, and a velour jewelry case. The edition is limited to 5000 pieces, minted by the NFL and NFLPA. Each Manning coin is, as you’d expect, individually numbered and comes with a certificate of authenticity.

What better way to celebrate Peyton Manning’s Hall of Fame career? Throwing a few passes with friends using a football autographed by the man himself seems like the perfect opportunity. A true die-hard Manning fan could not miss on a personally hand-signed collectible such as the Retirement Duke Football. The item also features the logos of Super Bowls 41 and 50, Manning’s peak games of an 18-year career.

Broncos Peyton Manning inscribed his name in the history annals of American football with a bevy of records and accomplishments. A luxury collectible allows you to partake a fraction of that legendary name.