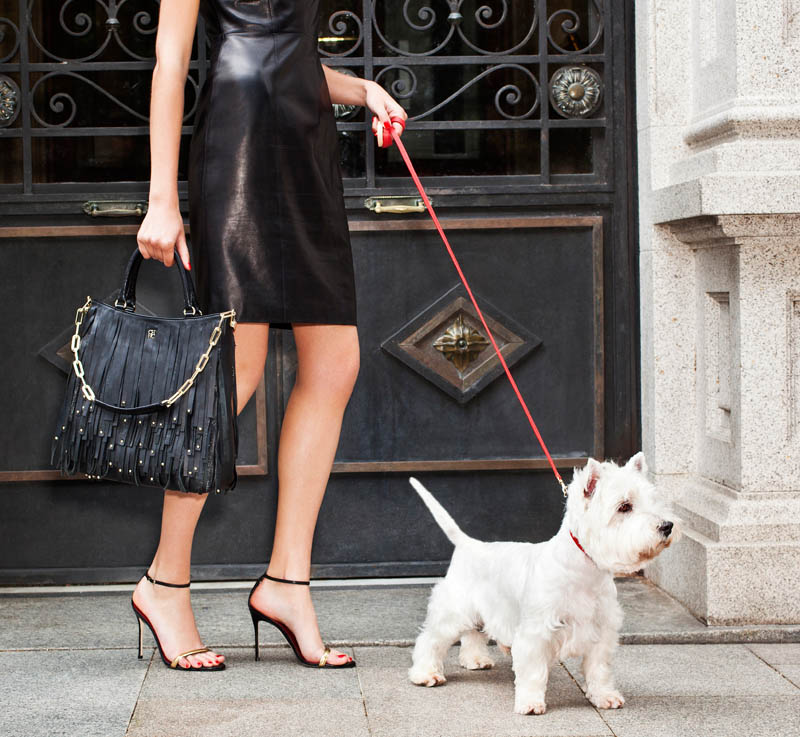 American designer Carolina Herrera has established her fashion house back in 1980. It was not long before the designer’s chic, exquisite designs achieved worldwide success in the fashion world. Today, her name is plastered on perfumes, handbags, and designer clothes. Her brand is well renowned in the luxury segment, which is why we decided to talk about her in this article.

Carolina Herrera was born in 1939 in Venezuela. She was introduced to the world of fashion quite early on by her socialite grandmother, benefiting from an early exposure to international culture and fashion. Young Carolina attended shows by Balenciaga and wore outfits designed by Lanvin and Dior for as long as she remembers.

In her own elegant words, “My eye was accustomed to see beautiful things.”

Therefore, it was no surprise when she became a Venezuelan-American fashion designer known worldwide for her exceptional personal style. She also received numerous awards and dressed celebrities and public figures such as First Ladies from Jacqueline Onassis to Michelle Obama.

According to The New York Times, Carolina Herrera’s designs are “elegant and worldly without ever being fussy,” which is a high compliment in itself.

But what exactly has this fascinating woman done to receive such praise from the media and the fashion world alike? A quick peek into her early career and the first days of the brand will reveal a small part of who Carolina Herrera was and her contribution to international style.

Carolina Herrera began her career in 1965 working as a publicist for Emilio Pucci, a close family friend and a Florentine Marquis himself. She started working at Pucci’s Caracas boutique, but later on, in 1980, decided to move to New York. During her time at Studio 54, Herrera frequently collaborated with Andy Warhol and Mick and Bianca Jagger. Soon enough, her dramatic style had become a personal signature.

In 1972, Carolina Herrera made her first appearance on the International Best Dressed List; in 1980, she was elected to its Hall of Fame. In 1981, her friend and supporter Diana Vreeland (Editor-in-Chief of Vogue at the time), suggests Carolina should design her own clothing line. Encouraged, she made some samples in Caracas, which led to the debut of her collection at Manhattan’s Metropolitan Club. The critical acclaim was no surprise.

Martha’s, one of the most well-known Park Avenue boutiques, helped Herrera become even more famous by showcasing her designer clothing in their large windows. This initial success encouraged her to return to Caracas and raise further capital. She wanted to organize a more formal launch, which included her very first runway show in 1980. Fun fact: Iman – the future supermodel – also walked the runway.

Carolina Herrera makes a huge splash in the fashion world by presenting her Ready-to-Wear Collection twice a year at the Mercedes-Benz Fashion Week, in New York. The Herrera company is still based in New York City (est. 1980). In 1981, several key publications gave their seal of approval, including Tatler and Women’s Wear Daily. They were particularly excited by her well designed sleeves.

Jacqueline Kennedy Onassis is one of the more notable clients of Caroline Herrera, who was asked to design the dress for her daughter Caroline’s wedding. Herrera also created the wedding dress of Diana, Duchess of Cadaval when she married Prince Charles-Philippe of Orléans, Duke of Anjou.

At the end of the 1980s, the Carolina Herrera name was licensed by Spanish fragrance company Puig. Together, they developed and marketed a new line of perfumes. In 1995, the firm purchased the entire Carolina Herrera fashion company, while she stayed on as the Creative Director.

Starting in 2011, her daughters Carolina Jr. and Patricia Lansing became active associates in the creative direction and design of the brand. In 2015, they released the first advert for the brand, which featured models Joséphine Le Tutour and Elisabeth Erm.

In February 2016, WWD reported that the fragrance line of the Carolina Herrera business was sold in more than 25,000 points of sale around the world, while the CH brand was included 129 freestanding stores.

Just a few months ago, Carolina Herrera announced she was launching a new women’s fragrance. The new creation was to become available for purchase in September as the brand’s biggest fragrance release in 14 years. Called ‘Good Girl,’ the fragrance employed Karlie Kloss as the face of the new line.

Given the brand’s inclusion in the luxury sector, the Carolina Herrera handbags are quite expensive. Manufactured from the finest fabrics or leathers, they often come embossed with the signature “CH” logo. Many of the authentic bags are made of real leather, which feels supple, soft, and smooth against the skin.

Also, you can tell if you’re buying a fake or an authentic Carolina Herrera bag by the zipper (which does not miss any teeth and work without catching). For extra safety, check the “CH” logo, which is more often than not featured on her handbags. The CH logo should be embossed on the leather in geometric patterns or simply straight rows.

What you need to know is that Carolina Herrera handbags come in a wide price range. You can get bags as cheap as $70 or as expensive as $1,000. The newest Herrera handbags are made of leather, suede with fur and they feature frayed trims. Colors vary, as well as the models; you can have the sleek, black Gaspar or get your hands on a bright red bag. Versatile items, the handbags can be used during the day or with night outfits.

If you’re feeling particularly generous with yourself today, scroll through our list of Carolina Herrera handbags below. You might just fall in love with the creations of this world-renowned designer. 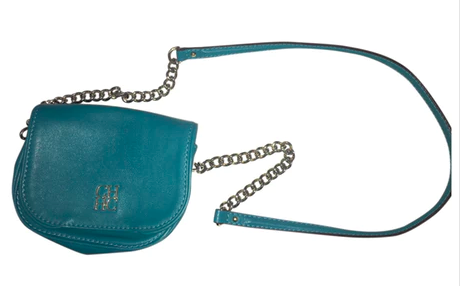 This Carolina Herrera item is compact and chic. You can carry your phone, lipstick and foundation with you, but that’s about it. It features the signature “CH” logo on the front in golden letters, and two pieces of golden chains on the shoulder strap. The bag’s authenticity is proved by the golden label featuring the full name of the brand. 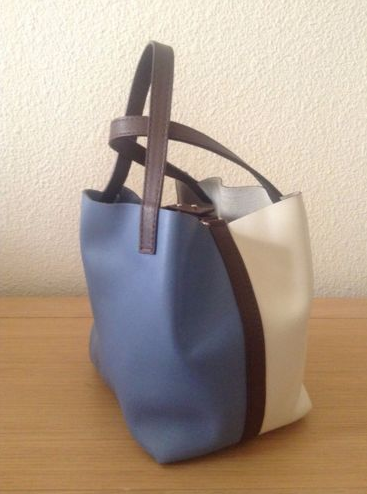 Some of the Carolina Herrera handbags are part of a limited collection called Matryoshka. Inspired by the Russian doll, the Matryoshka handbag represents elegance for the women who will wear this handbag in public. It gives off casual sophistication and it’s rather expensive at almost $700. Only select stores sell the limited Carolina Herrera collections. 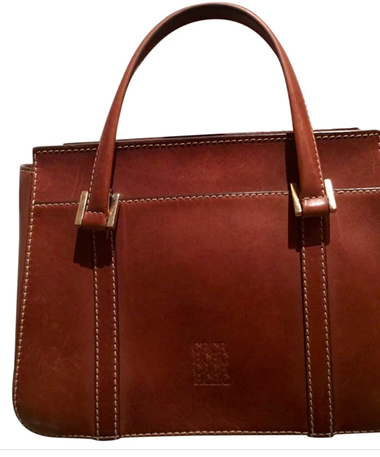 Almost the size of a tote, this Carolina Herrera bag is great for office days. Big enough to fit all of your necessary items – including files, if need be – this handbag still manages to maintain its elegance. Lacking a shoulder strap, this item is more of an arm candy that you can show off while also being practical. 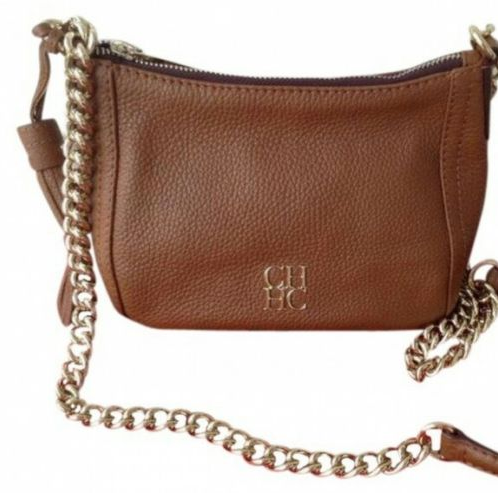 This beautiful deep brown pebble leather bag is perfect for all occasions. It comes with a gold chain strap and a studded tassel, both of which add to the luxurious feel of this crossbody purse. In pristine condition, the bag would make a great gift for yourself or the purse snob in your life. It’s made of the smoothest leather and the “CH” logo on the front of the bag attests for the authenticity of this bag. 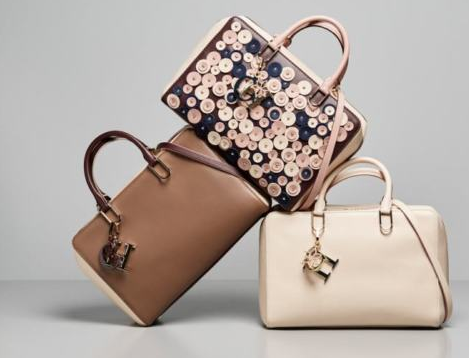 This nude beauty is a must-have. The golden accents emphasize the luxurious feel of the bag, while the protective metal feet on the bottom ensure you’ll never scratch it by accident. It’s medium sized, which means you can fit in it more than just your phone, and it features a zip top closure. It’s manufactured from the smoothest leather on the outside, while the inside is covered in canvas lining. The leather strap is detachable and it has quite a drop for a comfortable carry. 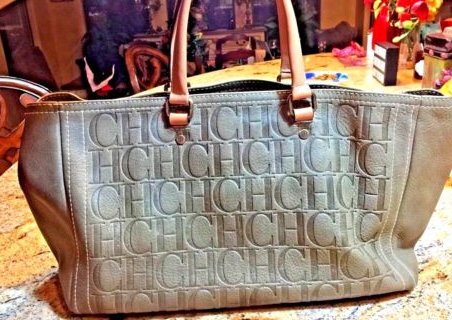 If you’re looking for a day-to-day bag that spells ‘elegance,’ you have found it. This gorgeous olive green leather bag is ideal for everyday use without being prone to scratches. Thanks to the embossed “CH” logo all over the front and back, any minor scratches will remain invisible. The color is a rare one in the Carolina Herrera collection, and the authentic tote comes with its original dust bag for attentive storing.