If you’ve been paying attention at all the past few years, you know electric vehicles are becoming the new “thing”.

Electric vehicles are making waves and only seem to be getting more popular over the years. However, one issue is that many people are concerned about being able to charge their EV’s. That’s why electrified roads are in the works to make it easier for all electric vehicle owners to charge while on the go.

First off, why do people want electric vehicles?

Regular, non electric, gasoline vehicles cause many issues to our earth. One major problem it causes is pollution - and man is it a lot! Due to this reason, the car industry has been trying to shape up. That’s why over the past few years we have seen electric vehicles come to the forefront of the auto industry. It’s a good thing too - because many people buying vehicles want better options that won’t harm our earth or themselves, and will cost them less. I mean c’mon - if you still drive a gasoline car (like me), I’m sure you’re tired of paying for high priced gas anyways. And if you’re someone who cares about the planet and your health, you definitely want an electric vehicle even more.

The last issue to solve for electric vehicles - charging.

So far, all automakers who are shelling out electric vehicles must be pretty happy considering the popularity they’re gaining. Hence, they’re making a nice amount of dough off these purchases. However, there are still many individuals who haven’t switched over and one big reason is due to charging concerns.

Even for the people who have switched, charging can be a constant problem and concern. Why is this? Well, outside of your own garage, charging stations are pretty few and far between. Which means sometimes, you can be left with no options or very few of them. That’s why something new is emerging to solve this issue and give us fast and simple charging - electrified roads or 'smart roads'!

To solve this charging issue, electrified roads were thrown into the mix. When thinking about it, it’s pretty genius. Of course when you have a vehicle, you drive it - and that driving happens on the road. So if there was a way to make roads smart, you could easily charge your electric vehicle just by driving on it. (Sick, right?)

Sweden is one of the places that has made electrified roads a reality, implementing its first one in April of this year (2018). This road is a 2 kilometer (1.2 mile) stretch that uses a pair of electric rails to transfer energy from the road to an electric vehicle above. However, you can’t just hop on the road and drive. To charge, you must connect your vehicle to a movable arm that transfers power from the rails to your batteries.

Even with that being the case, it’s still an amazing feat. Plus, as far as pollution goes, this system has shown to reduce carbon dioxide emissions up to 90%. For now, the electrified road will remain 2 kilometers, but Sweden plans to expand it across the country. Surely this will help reduce their transport fossil fuels 70% by the year 2030. That alone makes it more than worth it!

China is another place that wants in on smart roads. Per usual, they hope to be the first to build a solar road that will wirelessly charge electric vehicles. They don’t have to worry much though, because they’re well on their way. In May, Qualcomm (telecom and semiconductor giant) demonstrated dynamic electric vehicle charging. ‘DEVC’, also named Halo road, allows electric vehicles to charge while driving - just as Sweden’s electrified road does.

They aren’t the same though. China’s smart roads will use technology comparable to wireless charging you currently use for your phone. To be specific, it uses inductive charging. Their electrified road was built to test a wireless charging system that can charge electric vehicles at highway speeds. Not only vehicles going high speeds though, multiple EV’s at once - even going in different directions! Halo could be used to line a myriad of roads or even make self charging parking spots.

Currently there are other types of smart roads in the world. Two of these places include a photo-voltaic road in France and a solar highway in China. These smart roads aren’t the same as the above mentioned roads. Currently they don’t charge electric vehicles while in motion. Although, some locations can power buses and taxis by this electricity. 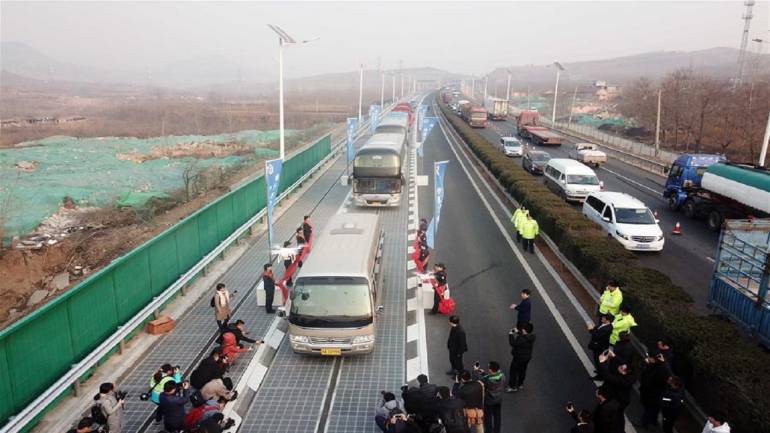 The best some can do right now is charge electric vehicles while being parked. However, they do provide loads of renewable energy locally and help in the road's conventional use. Just as Sweden’s and China’s most recent projects to provide full charging to consumer EV’s on the move, these roads hope to do the same.

Overall, electrified roads are definitely a great option for electric vehicle drivers all around the world.

With more availability to use when you’re out and about, the problem of trying to find a place to charge your car (or being stuck!) will stop. In addition, those worried about getting an EV due to this reason will finally make the switch. I know I would if this was an option!

What about you? Do you think smart roads are a good option? Would you use them if you had an electric vehicle? Or, if you’ve been worried about EV’s due to this reason, does this change your mind about getting one? Let us know in the comments below!