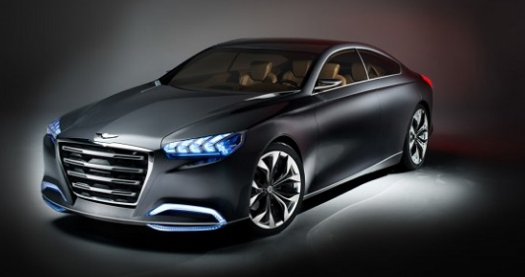 In 2016, Hyundai made the executive decision to step into the luxury market. The launch of its standalone Genesis brand in the U.S. made some mild waves, but is the newcomer worthy of your attention? A senior Hyundai executive is quite optimistic, especially in the light of early response.

Yet Another Peter Schreyer Hit

A big name in the auto design industry, Peter Schreyer is once again making headlines. Just the mention of his name brings a smile on the faces of his colleagues. He is much admired for the original sketching of the TT – the 1998 Audi that spread excitement with its clean aesthetic, formal simplicity, and cool Bauhaus-inspired design.

Schreyer is the creative director of Hyundai-Kia and one of three presidents of the company. Much of the existing theme of the carmaker is credited to him. Schreyer’s astute eyes directed the South Korean company into an exciting metamorphosis. Nowadays, Hyundai is represented in the world as a serious car brand featuring an inspired portfolio. Nothing stops it from competing head-on with much older and more established rivals.

But Schreyer was apparently not done from leaving his mark on the auto industry. Last year he proudly presented a new global luxury marque, called Genesis. While we’re happy for his achievement, the question begs to be asked: Does the world need yet another luxury brand?

Genesis: Korean Culture at Its Finest

Before we tell you Schreyer’s own response to that question, keep in mind that Genesis has a specific initial target in mind. According to the carmaker, their models are developed primarily for the South Korea, Middle East, China, and the U.S. Instead of trying to cover all of the auto markets at once, the company will continue to expand only in response to the initial feedback.

Yes, Genesis also hopes to reach the European markets in the future. However, the main focus at the moment is to deliver six new models before 2020. Two models – the G90 and G80 –have already been launched, while an upcoming G70 will soon be followed by a sports coupé and two SUVs.

“I don’t know [if the world needs yet another luxury brand] but Hyundai wants a luxury brand. I think the time has come and we need to be building something special at the pinnacle of the brand. It fits with the Korean mentality.” – Peter Schreyer

The Hyundai-Kia executive has a very interesting take on South Korea, his home away from home. The German auto designer spends a lot of time commuting between the company’s design studios in Russelsheim and Seoul. And while the South Korean economy is definitely blossoming, and so is Hyundai-Kia.

According to Schreyer, Genesis could not have had a better cultural background as its inspiration. The Korean culture features a sublime duality; on the one hand, they are very daring, unafraid to pioneer. On the other, they are also fantastic strategic thinkers. The designers cannot help but feel inspired by this culture deeply rooted in craftsmanship and tradition that isn’t afraid of its polar side. Hyper-modernity is found in tech, art, K-pop, electronics, fashion, music – a vibe that Seoul gladly lends to anyone looking for inspiration.

As a new car marque, Genesis has the chance to apply the concepts of modern luxury in its fresh approach. Such innovative initiatives have the great opportunity of exploring new materials that resonate with Millennials, make sure they respond to their needs and wants. Luckily, Schreyer is very much aware of the unique chance of rethinking the automobile for younger generations.

While traditional concepts of luxury are still in vogue for a lot of customers, Genesis wants to adopt a different approach. Therefore, Schreyer’s team is working on using intelligent fabrics that help express modern luxury. To this end, Genesis is partnering with students at the prestigious Art Centre College in California and the London Royal College of Art. The purpose? Researching new ways to illustrate luxury that are “more exciting and rewarding.”

A few auto feathers were recently ruffled when Schreyer hired the former Bentley design boss, Luc Donckerwolke. He is now the head of the Hyundai Motor Design Center, while Manfred Fitzgerald, who was brought over from Lamborghini, is now director of Genesis’ brand strategy. It’s a strong team of creative talent, which indicates that Hyundai-Kia is setting their hopes on the marque.

With its subtle sensibility, the New York Concept – the hybrid sports sedan launched at the New York Auto Show back in March – is a good illustration of Schreyer’s design philosophy. The upcoming G70 will be designed based on the New York Concept, while some elements will also find their way to future Genesis models.

According to Schreyer the marque “is something totally new, it is something we’re still working on. We try not to copy other brands but make our own story. It is a great project; you see we get to design a new brand the way we feel it should be. We have a great opportunity here. We have Hyundai and Kia, but Genesis is something completely different. It has to be a brand on its own. This is important from an intellectual side.”

Each year, a unique long-term partnership between London’s Tate Modern gallery and Hyundai Motor gives the public the Hyundai Commission. It’s a great opportunity for artists to create new designs for the unique context of Tate Modern’s legendary Turbine Hall. Over the years, this space has hosted some of the world’s most acclaimed works of contemporary art, admired by an audience of millions.

This year, visitors can also enjoy French artist Philippe Parreno’s mesmerizing light installation, which spreads over the length and the height of the spacious Turbine Hall. The installation is part of the Hyundai Commission project, one of the international artists funded by the car company.

Luc Donckerwolke, Genesis’ Belgian car designer, recently revealed he also dabbles in art. In his own words, he “wanted to be an artist since I was 14. I wanted to be Dali!” But how does the abstract world of the fine arts fit into the more restricted world or auto design? “We can learn a great deal from art and the way artists think. Questions are always arising in design and I say to my team, always try to think completely in the opposite direction,” Donckerwolke noted.

For the next few weeks, the Turbine Hall is transformed into an immersive experience, offering the public a different perception of time and space. The modern exhibition is open and free to the public until 2 April 2017.

Genesis promises to head the evolution towards the genuine luxury by prioritizing a modern approach to luxury. The Genesis G90 is a model unparalleled in the luxury experience, transcending the category norm. From the way it looks, to the way it drives, and finally to the way it fits into your life, the G90 is a joy to behold.

Features: With a first-class cabin and elegant styling, the G90 represents Genesis’ first step towards a luxury sedan. With the G90, almost every conceivable feature is standard. Highlights include adaptive dampers, a 12.3-inch touchscreen for infotainment, automated emergency braking, a head-up display, and adaptive cruise control. Two engines are available—a 365-hp 3.3-liter twin-turbo V-6 and a 420-hp 5.0-liter V-8. Both feature an eight-speed automatic and rear- or all-wheel drive.

In its quest for the perfect balance between refinement and athleticism, Genesis has created the G80. It delivers a stable and responsive ride even at high speeds. Just like the archer that focuses his entire strength and spirit into the tip of his arrow, so does Genesis G80 in its embodiment of masterful control and breathtaking energy.

Features: The G80 makes for a compelling choice for the drivers seeking value and something different from established luxury brands. The standard offers a 311-hp 3.8-liter V-6 with an eight-speed automatic and rear-wheel drive, while the 420-hp 5.0-liter V-8 is optional. Only the V-6 engine offers the option of all-wheel drive. In the G80’s long list of standard-equipment are a head-up display, an eight-inch touchscreen with Apple CarPlay and Android Auto, automated emergency braking, and adaptive cruise control.