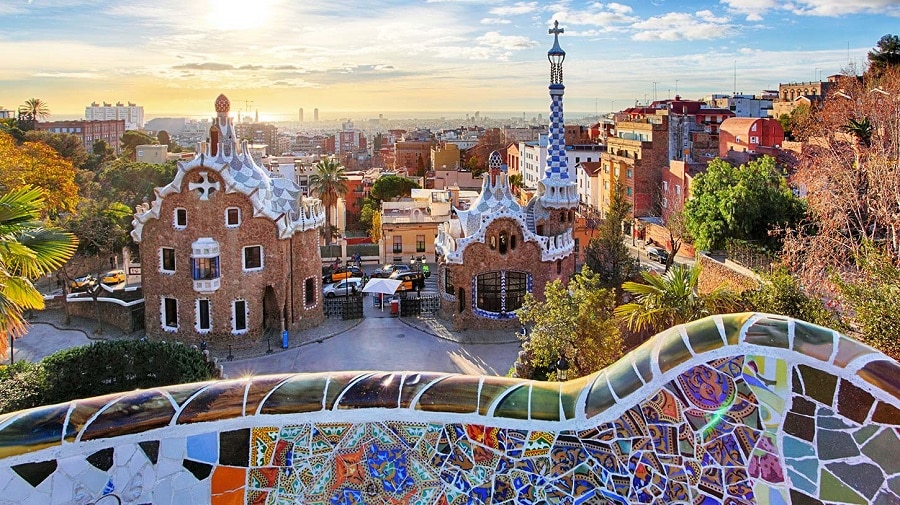 The city of Barcelona is a must-visit destination for any seasoned traveler. In the same category as Paris, Rome, and London, this Spanish gem attracts millions of restless tourists each year. Is Barcelona on your traveling bucket list? Do you want to know more about this beautiful city before you land? Here’s a useful guide providing you with all sorts of information – including a short list with the best hotels in Barcelona – to make your stay simply memorable.

Famously known for its football team (Barça) and the gorgeous architecture of Sagrada Familia, Barcelona has a lot more to offer. A bustling business center, this European city remains a preferred location for all sorts of congresses. If art and culture is your thing, the breathtaking building styles rich in history will satisfy your curiosity. There’s something for everyone to enjoy in Barcelona, which is why this amazing destination rates as the third most visited city in Europe (and the 12th in the world).

What to Expect in Barcelona

There are some things everyone knows about this Spanish city. Like the fact that Sundays are dead days – only food stores in tourist areas stay open. Also, being on time is not a priority for the locals, which is why you shouldn’t rely too heavily on public transportation schedules. La Rambla is indeed fascinating, but it’s not as cool as tourist guides make it out to be. Below are some technical tips that can significantly improve your stay. Read on to find out what each tourist should know before coming to Barcelona.

As a coastal city overlooking the Mediterranean Sea, Barcelona has one of the most pleasant climates. Warm summer months and mild winters invite tourists all year round. While it can get quite hot in summer, it’s nothing a quick dip in the sea won’t relieve. July and August are the hottest months, with temperatures rising to around 85°F. The travel season is official open in May, when the temperatures start rising and people start walking the streets. By the end of June, the beaches start to crowd, even though the water is still too cold to bathe in.

Speaking about beaches, you must know there are better beaches in Barcelona than Barceloneta. Even though it’s the most popular beach, it’s also the dirtiest, the most crowded, and the least desirable. Chances are you won’t have a spot to put your towel on, so why not consider other destinations? Mar Bella, Nova Icaria, and Bogatell are some of the cleaner and slightly less crowded beaches in Barcelona. You may want to take a one-day trip to Costa Brava beaches.

If Barcelona is a can, then you and the thousands of tourists walking its streets are the sardines. As one of the busiest European cities, Barcelona is simply packed. Coastal Mediterranean destinations don’t really have a down season, so you should expect to walk on streets filled with international faces. The Ciutat Vella – the old city – attracts the most tourists. The Raval, the Born, and the Gothic Quarter are indeed some of the most beautiful neighborhoods in Barcelona, but you could also explore Gracia, Poble Sec or Poblenou.

Don’t be put off by the active life of Barcelona. With a bit of strategic planning, you can still enjoy your memorable trip. The best time to visit is between January and the Holy Week. Also known as Semana Santa, it inaugurates the high season for tourism in Spain. We recommend scheduling your visit in early spring. You’ll be able to enjoy great parties with grilled baby leeks and delicious red wine. It’s also the time when streets and landmarks are relatively empty. If you want to avoid the chilly weather, go in late September or October. The Mediterranean will be warm enough for swimming and the summer throngs are slowly ebbing.

You should know a bit about the Spanish meal times so you don’t visit the city on an empty stomach. The eating hours are unlike any other place you’ve visited. Lunch is the most important meal of the day, the time to enjoy a three-course meal and drain half a bottle of wine. Expect lunch to be served between 1:30 and 3:30 pm. Restaurants are generally empty around 8 pm because locals typically dinner from 9 to 11:30. If you can’t hold out for that long, work in two mini meals throughout the day. A sandwich around 11 am, and a drink and a snack around 7:00 pm.

• No Need for Tips

The locals rarely expect gratuity in Spain. In fact, it’s almost unheard of, so don’t go all out with the tips at each meal. That’s not to say you shouldn’t tip a server at an elegant restaurant with excellent service. Five or 10 percent will do in the case of high class dining. Leaving a big bill at a table will probably create confusion and not delight. “Know your audience” it’s a good rule of thumb when it comes to tipping in Barcelona.

If you’re planning to do a lot of sightseeing, the best places to stay in Barcelona are near central square Plaza Catalunya. Ciutat Vella, the old city, is also highly sought-after by tourists interested in historical attractions. However, keep in mind the old city is a little noisy, bustling with vibrant life day and night. The Eixample, the newer, more modern part of the city, offers state-of-the-art architecture and charming hotels. If you’re seeking accommodation with sea views, Sant Marti is one of the most popular areas.

For your convenience, each of the following subheadings contains a link to TripAdvisor. If any of these hotels draw your attention, you can click on the link and check for availability. Nothing is stopping you from starting your booking right away!

Located on the acclaimed Passeig de Gràcia, this hotel is ideal for keen shoppers who don’t care about the price tags. Also, Mandarin-Oriental is the right choice for you if you’re a fan of Gaudí’s architecture. Opulence and chic details meet you at every corner, from the raised walkway to the luxurious rooms. Definitely not a hotel for the faint-hearted, but it also won’t scare its guests away with stuffy accommodation. Mandarin-Oriental is a hotel of calibre, which means the staff know what they’re doing, and offer good directions to customers who need it. Guests can relax up and enjoy the panoramic views on the rooftop, or work up an appetite in the exquisite pool.

Right on the Passeig de Gràcia, this amazing hotel is handily located for higher end shopping. Finding better service in Barcelona is likely impossible, as nothing is too much trouble for the staff at Majestic Hotel. Amenities include a refined spa with a splendid range of treatments, a rooftop pool, a business center, and a luxurious gym. The rooms are exceptionally comfortable, decorated in neo-classical undertones and brightened by matching wallpaper. You’re sure to enjoy a good night sleep on their high-quality mattresses!

One of the top hotels in the city, W Barcelona is far away from the noise and bustle of Barcelona. Perfect for those looking for a relaxing getaway, this hotel is set along the boardwalk in La Barecloneta. Most reviews agree this modern-chic hotel is an excellent choice, offering guests some fantastic views. If you’re a fan of seafood, the W Barcelon is conveniently located within walking distance of some of the best seafood restaurants. The rooms are bright, featuring large windows and fully-equipped bathrooms. Despite the high level of luxury, the prices are moderately decent.

A couple of minutes away from the Passeig de Gràcia, the Palace Hotel is great for shopping and for exploring some of the best Modernista architecture in Barcelona. Stunning opulence meets the eye at every corner, and a waft of the Ritz legacy still lingers in the luxurious drapes and the rich swirly carpets. The common areas feature exquisite baroque excesses, while the rooms greet you with some sober neo-classical lines. Ivory and cream predominate, exuding an air of luxury, while large television screens stand atop elegant marble fireplaces.

The hotel overlooks the Port Vell from its spot on the Passeig de Colom. Since Port Vell has recently turned into a marina for luxury yachts, the views are unparalleled. A tasteful design greets guests from the lobby, luring them in with the white and chocolate theme. The Deluxe rooms are bright and spacious, featuring floor-to-ceiling windows and large balconies. The port-facing rooms have a great view, but if you’re bothered by noise, book a room at the side.