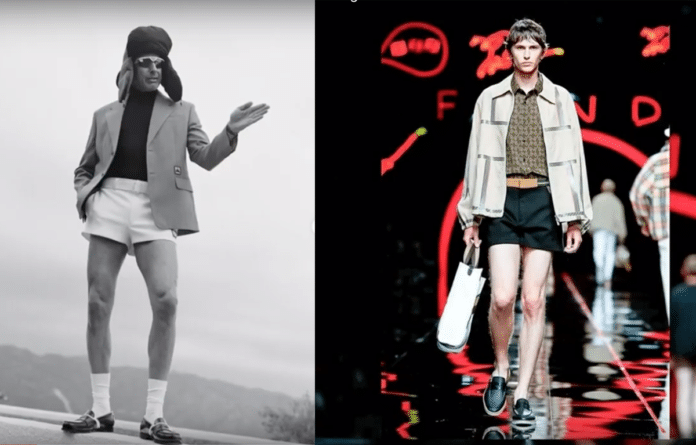 In a world that is seeing more and more spells of hot weather, a fashion trend for men’s short shorts for spring/summer 2019 could be a welcome and liberating surprise for some. Although some men seem to see exposing their thighs as a cardinal sin, quite a few fashion designers and celebrities are jumping at the chance to show off their legs.

It might seem like a return to the 70s, but the trend has been coming on strong in recent years.

Jogging in short shorts back in the 1970s. ? pic.twitter.com/nivwwYFtNI

Big fashion names Prada, Fendi, Missoni, Off-White and Jacquemus have featured men in skimpy shorts on the season’s catwalks. The trend seems to have gone over well with customers. Matchesfashion.com reported a 43% rise year on year. Now fashion retailers ASOS and Urban Outfitters are selling affordable short shorts for men.

Miuccia Prada went so far as to describe the shorts as “miniskirts for men.”

In a black and white photoshoot for Prada, quirky actor Jeff Goldblum sported short shorts as only he could wear them. In a recent Dazed magazine issue, Goldblum wore Prada shorts that go for over $790 with an inseam of only 1.6 inches in one case.

The look may not inspire thoughts of high fashion, but will probably make you laugh. That lighthearted approach is part of the appeal of the short shorts. However, they are undeniably comfortable and bold.

Click the arrow on the right below to see Goldblum’s additional shots.

Jeff Goldblum is back in a big way for #JurassicWorldFallenKingdom, but @thisisbabel's short shorts were the REAL star of our interview! https://t.co/mFTww6advy pic.twitter.com/UVUWCDpWjT

For Joe Stone, writer for the Guardian, part of the appeal of wearing short shorts is taking the risk to appear “silly and carefree” rather than “sweaty and repressed.”

“The fact that short shorts are frowned on in stuffier quarters only adds to their appeal, lending the wearer the insouciant air of a person who doesn’t have a panic attack when asked to taste wine in a restaurant and isn’t too terrified to answer an unknown phone number (imagine!).”

“Wearing them, I feel like someone who might conceivably have set foot on a yacht,” writes Stone.

I've written about my love of short shorts. Mods have insisted on no comments (lol), so haters please @ me on here: https://t.co/aRYhV03Ciz

For other guys, showing off their physiques is the idea. For example, Superman actor Henry Cavill recently took part in the Durrell Challenge running race in Jersey, Channel Islands. As he raised funds for Wildlife Conservation Trust, some were admiring his shorts.

Imagine running a marathon and Henry Cavill wearing a tank and short shorts is right there with you. pic.twitter.com/6AJBqPwqpE

For some designers, like Tom Ford, short shorts “should only be worn on the tennis court or on the beach,” but even Ford offers his own slightly longer shorts for such occasions.

Some people very much appreciate the look of a man in short shorts, including the woman below who shared her story about her husband on the air.

Listen to the funny story below:

Short shorts for men. You in?
Listen Live: https://t.co/W61eOxsHEr pic.twitter.com/lq7novEeDe

If you find men in short shorts offensive, then consider that it could be worse. They could be wearing a “Jeado,” skimpy swimwear printed to look like denim jeans. Yes, that seems to be a thing today, though not exactly high fashion.

See more about the short shorts craze below: