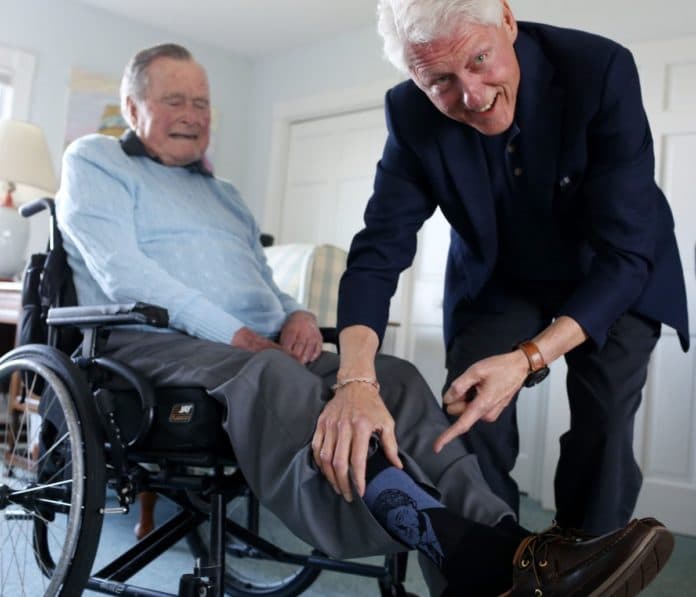 This weekend, the 41st President of the United States, George Herbert Walker Bush, passed away suddenly at the age of 94.

It might be strange to think of a nonagenarian dying and it seeming “sudden,” that’s how vibrant President Bush was. Less than a year ago he made his final public appearances in saying his final farewells to his wife Barbara. He was the president who put the final nails in the coffin of the Cold War. He was the last president to end a war, and the last Republican almost everyone speaks of fondly. There will be miles and miles of column inches dedicated to President Bush in the newspapers of the world. They will talk of his considerable accomplishments as an oil pioneer, a war hero, a civil servant, an intelligence officer, and a president. Since they have that covered, that leaves us the opportunity to talk about his footwear game.

A lot of serious people will have serious thoughts about President George H.W. Bush and his legacy.

Luckily, we aren’t talking about any of that. Rather, we are talking about his penchant for wearing ostentatious and flashy socks while out doing his post-presidential duties. Duty was always a big part of the elder Bush’s life, starting when he joined the Navy on his 18th birthday. He served as a naval aviator flying a number of missions in the Asian side of the Second World War. He flew a total of 58 combat missions by the time the war was over, and he received a number of military citations. Along with three Air Medals, he won the Distinguished Flying Cross and the Presidential Unit Citation awarded to his ship. He left the Navy in 1945, one month after the Japanese surrender. However, despite all that, one of his favorite accomplishments was being named an honorary Blue Angel. As you can see in the above photo with the pilots, he’s rocking some pretty fly socks.

George H.W. Bush was not a daring man, at least not when it comes to fashion, but his ankles got braver in his later years.

As one of the generation of Americans who came of age during the Great Depression, George H.W. Bush seemed almost bewildered by all the changes of the Baby Boomer generation. However, unlike his contemporaries on the Republican side of the political spectrum, he neither feared nor begrudged it. Famously during his last weeks in the White House, the 41st President invited Dana Carvey to speak with him. This was notable because Carvey impersonated Bush on Saturday Night Live. Over time the impression grew more and more cartoonish. Worried that he’d offended the president, Carvey asked Bush if he’d ever been offended. Bush said no, saying that the ability to laugh at each other was a crucial part of what makes Americans a community. So, perhaps that why he was so good-humored about wearing socks like those above, festooned with Superman logos. Sure we all think comic books are cool, but for people of Bush’s age it was just kid stuff. Yet, he didn’t mind being laughed at a little.

George H. W. Bush’s fancy socks gave his outfits some real character, and they offered him a chance to work with a theme.

In the image atop this post, former President Bill Clinton visited Bush Sr. at his home shortly after he was given a service dog for veterans. In the photo, Bush Sr. is showing off his fancy blue socks on which a likeness of Clinton is stitched. However, he liked to work with a theme. If the rule is you aren’t supposed to wear a t-shirt from the band you’re seeing live, Bush believed the opposite was true for his socks. When he went to see a performance of the iconic musical Hamilton in New York, he work a pair of yellow socks adorned with dark, five-pointed stars. The Playbill for Hamilton featured a star on a yellow background. While not an exact match, it was close enough for us to notice. He would also wear socks with sports logos when he went to see his beloved Texans play football. It is tough for men of Bush’s generation to cut loose, especially when it comes to fashion. Yet, in wearing his fancy, ostentatious socks, Bush was a fashion role model for us all. If only because he was having so much fun while wearing them.

The loss of the 41st President was inevitable, but it serves as a reminder to a time that was both better and worse than our lives today.

We live in an age of constant miracles from folding phones to wirelessly-linked video cameras that let us watch our dogs from afar. Bush’s attitude about not being afraid of the future is a lesson that every generation could learn. Rather than scorning “kids these days,” we simply must try to be good examples and have faith in them. As a politician, George H.W. Bush wasn’t some non-partisan man who got along with everyone. In fact, behind-the-scenes of his operation Bush had some of the most serious political hatchet-men in the game. However, once he won the office, he left the hatchets behind. He tried to be a leader worthy of the title and one we could respect. If we can’t learn a lesson from this, about how we don’t have to try to destroy our enemies all the time, then the least we can do is learn to have more fun with our sock choices.

What do you think? Share your thoughts, memories, and reactions below. Don’t forget to share the article on social media, so your friends can get in on the conversation.

Related Article: The Best Luxury Socks for Men to Keep Your Feet Warm