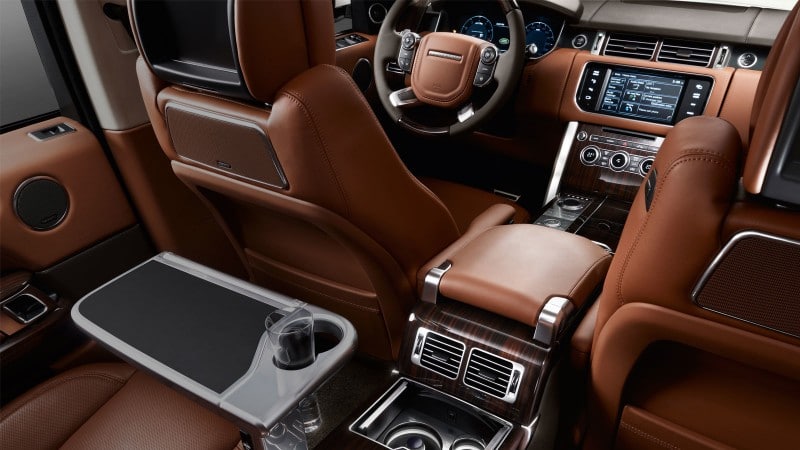 Land Rovers have been traveling all around the world, from the whitest dunes of the Sahara to the highest roads in the Andes Mountains. Even the most remote countries recognize the popular brand, as this British carmaker conquered borders, crossed rivers and rode through the bumpiest two-tracks. Land Rover boasts an illustrious history of more than 60 years, and according to some claims, around 60 percent of the planet’s population is familiar with their motorized vehicles.

Thanks to its flawless off-road credentials, Land Rover continues to serve soldiers and explorers across the world map. But even though they used to represent only toughness and security, Land Rovers have now evolved into a superb symbol of luxury and prestige. It wasn’t until 1987 that Americans saw the iconic off-road cruising down the U.S. roads. In celebration of 30 years since the Landie first set foot on the American shore, we’ve decided to rank some of the most luxurious Land Rover rides that money can buy.

Land Rover is a vehicle brand owned by Jaguar Land Rover, a major British car manufacturer. It specializes in four-wheel-drive cars and is one of the most famous British icons. Land Rover prides itself in the prestigious history, tightly intertwined with the one of the British royal family. For instance, King George VI granted the brand a Royal Warrant in 1951.

The Rover Company originally used the name “Land Rover” for the Land Rover Series, which made it on the market in 1948. However, it soon turned into something more than that: A brand that comprised the entire range of four-wheel-drive vehicles. The collection included the Range Rover, Range Rover Sport, Discovery, Defender, Freelander, as well as Range Rover Evoque.

In the present, Land Rovers are assembled in the brand’s Solihull and Halewood plants, while R&D happens at the engineering centers in Whitley and Gaydon. According to the sales records of 2009, Land Rover has sold more than 194,000 cars all around the world. With expansion as the logical next step, Jaguar Land Rover announced in 2013 the opening of a new R&D center. Located in the University of Warwick, Coventry, this facility’s ultimate purpose is to develop the next generation of vehicle technologies. There are currently more than 1,000 engineers and academics working there.

In late 2012, the automaker released a statement about an exciting joint venture. Both Jaguars and Land Rovers were going to be built in China, which is undeniably the biggest car-market in the world. The Chinese factory in Changshu started building vehicles in 2014, but only on a trial production. Evoque is the first production model of the Chery Jaguar Land Rover venture, while other models also feature modifications to meet the Chinese car market demand.

As we promised, below are five of the biggest successes in terms of Land Rovers released until 2017. While we provide a short review for each of them, you can also access the links that will redirect you to Land Rover’s official website.

If you grant this Range Rover just a short glance, you might classify its smooth profile and sleek interior as yet another luxury car. However, the Range Rover has always been – and continues to be – the flagship Land Rover. Consequently, the large SUV also features some major off-road capabilities. With its long-travel and easily adjustable air suspension, the Range Rover raises to greater standards in the dirt. Let’s not forget about this bad boy’s computer-controlled Terrain Response four-wheel drive system. For the trailwork it promises to deliver, the Rover can provide around a foot of ground clearance by rising up on its strong springs. Unlike other 4WDs, Range Rover also includes water fording in its package of skills, designed to cross water up to 3 ft. deep.

And with its aggressive 2.93:1 low-range gearing, the Rover passes any obstacle with flying colors. Add to the mix the optional locking rear differential, and the brand’s champion leaves any other luxury SUV eating its dust. Since we mentioned the spinning tires, we recommend you choose the 5.0-liter supercharged V-8. That way, you’ll get behind the impressive 510 hp and take that Range Rover to 60 mph in 5 seconds flat. You will have to pay up, however, because this Landie beast starts at a base price of $84,000.

The 2012 Evoque was one of the most distinguished Land Rovers, pushing the brand further than ever. Crossing off a list of ‘firsts,’ the Evoque changed everything we knew about the company’s manufacturing since the very first model launched in the U.S. More than just the most fuel-efficient and lightest Range Rover ever produced, it was also the first Land Rover offered as a front-drive model in Europe. With a befitting name, the Evoque proved to be as aggressive as they come, with big wheels, a bold roofline, and a wickedly raked windshield. Not to mention the giant panoramic sunroof that evokes your attention!

However, this luxury model is more than looks, superb as they are. Winning several titles, including “2012 Sport/Utility of the Year,” the Evoque crushed its competition in terms of safety, engineering excellence, efficiency, and performance. Although most city drivers will rarely have the chance to take the Evoque off the beaten path, this baby could take the heat in strides.

Thanks to 50 years on sale, it’s not actually a surprise to see the Range Rover on the road. However, recent times have brought a certain boom in the luxury SUV sales. Consequently, we saw the car passing us by even more often. This model impresses through its stylish presence and imposing features, particularly the ones fitted with the optional black pack. The black badging and the black alloys do a great job in giving the Vogue a fabulous sinister feel. In spite of the minor freshen up that Land Rover gave the Range Rover, the iconic car remains faithful to its 45-year legacy.

Still a luxury off-roader that you can drive on any terrain, the mid-range Vogue SE model comes with a 4.4-litre twin-turbo V8 diesel. Given that its base price is $222,610, this is not the car to drag through bumpy off-road courses and unforgiving muddy tracks. However, Land Rover was pretty adamant proving the Vogue can still do all of that and come out a winner. All in all, this car is not just a fantastic luxury SUV, but also a spacious model with high seating position and tall body. Visibility is not a problem, and the V8 diesel engine delivers flawless performance.

The first sign this is a fancy model is its 34-letter name. However, the most important part is the “SV” – Special Vehicle. The Range Rover and (in the recent past) the “Autobiography” moniker have been used for exclusively for the ultra-luxurious cars. The SV name is similar to those ones, derived from Jaguar Land Rover’s SVO “Special Vehicle Operations” branch. Those two letters automatically convey a fresh undertone to the Autobiography’s sandalwood-smooth scent. The result is a rugged application of power and fine control.

According to Land Rover’s own reports, the SVAutobiography is supposed to reach 60 mph in the same 5.5 seconds as the LWB Range Rover Autobiography. Considering the extra power it packs, that’s rather conservative. At the same time, the top speed remained unchanged at 140 mph. But what does the SVAutobiography have to show for on the inside? In simple words, the interior is a remarkable sight. Land Rover’s statement that the new range-topper is “the most luxurious and powerful series-production Range Rover” is not at all a hyperbole. The good news is that the SV’s $200,490 starting price is actually a bargain.

Jaguar Land Rover’s performance and personalization division, Special Vehicle Operations, has already proved it’s capable of creating vehicles of immeasurable charm. Just think back on the Range Rover Sport SVR and F-type SVR. The cherry on top, the SVAutobiography Dynamic is one of the greatest models to bear the Land Rover logo. Good looking, awesomely abled, and a delight to drive, the SVAutobiography Dynamic impresses from front to rear. Its finest attributes – such as the powerful visual presence and the rugged roar – are a joy to behold.

Unlike the standard, this Land Rover model sits a little more comfortably over its wheels. The lower position befits this car designed to be speedy on the most challenging roads. The automaker has also made numerous changes to its suspension set-up. The result is a significant increase of the body control without having to sacrifice the overall comfort. One of the most dynamic elements of the package is possibly the riotous powertrain. That smooth, rumbling and spectacular supercharged V8 driving through all four wheels is worth the upgrade.