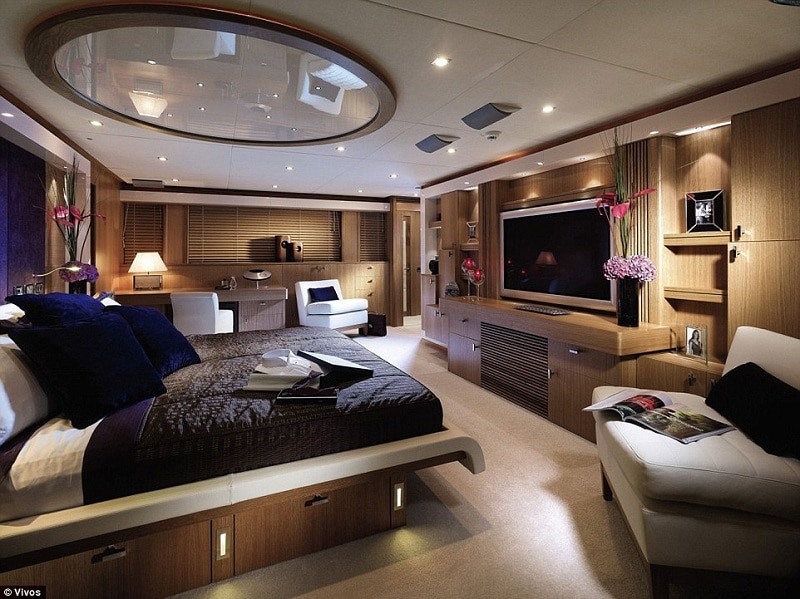 What do you think of when you hear of nuclear bunkers? For most people, the term conjures up images of concrete rooms filled with uncomfortable cots and endless supplies of canned goods. The threat of global annihilation may not be as actual as it was during the Cold War, but that hasn’t stopped people from creating high-security shelters that clearly surpass the facilities of their 20th-century counterparts. A number of businesses around the globe have created luxury doomsday structures that meet the growing demand for protection against any risk, be it an asteroid, a nuclear catastrophe or World War III.

Should you prepare for catastrophic disasters or nuclear warfare? According to some of the richest people in the world, it’s not too early to start investing in five-star luxury bunkers. Rumor has it that bankers, sports stars, celebrities and even tech personalities like Bill Gates have already bought their spot in a multi-million dollar bunker. While the main goal of these structures is to withstand a nuclear blast, they do much more than that.

Some of the luckiest, wealthiest people in the world have shown increasing interest in luxury nuclear bunkers, which seem to be springing up like mushrooms after the rain. Thanks to the extravagant amenities, these people won’t just survive any global threat. They will also continue to benefit from their current luxury. Equipped with cinema theaters and spa facilities, the bunkers aim to cater to their every whim.

But why the sudden interest? Bunkers were once disregarded as an over-the-top purchase for ultra-paranoid and excessively rich people. But due to the unstable socio-political context of our times, they have suddenly become a more sensible concept. One of the biggest threats at the moment is North Korea, which warned that “a thermonuclear war may break out at any moment […] if the US dares opt for a military action.”

The two nations have experienced increasing tension, which culminated with the statement given by North Korea’s deputy U.N. ambassador Kim In Ryong in a news conference on Monday. According to him, the East Asian country is prepared to react to the U.S., should the American nation seek to instigate war. He added that the threat is real, considering the Trump administration has deployed the Carl Vinson nuclear carrier task group close to the Korean Peninsula. Is the U.S. trying to invade the Democratic People’s Republic of Korea? We don’t know, but one thing is for sure. Rich people don’t want to wait around to find out.

According to Gary Lynch, the general manager of Rising S Company, Texas, U.S., sales have gone through the roof for their luxurious underground shelters. In 2016, the sales grew 700 percent compared to the year before, with particular increase after the November presidential election. Apparently, the high-end American population doesn’t feel as safe since Donald Trump took control of the White House.

A number of companies have started taking the matter seriously, building opulent shelters across the U.S. Robert Vicino, CEO of Vivos, said in an interview that luxury complexes are crucial to human survival. Companies like Vivos have transformed military bunkers and missile silos into elegant condos and underground suburbs. Most of them offer their rich customers swimming pools, cinemas, and leisure areas.

The Luxury Survival Condo Resort is the project of engineer Larry Hall. It is formed of two luxury bunkers located in the state of Kansas, U.S. Mr. Hall has converted the missile silos into private, secure apartments that can withstand nuclear threats. Situated in secret locations, these nuclear bunkers are steel-plated, strong enough to survive earthquakes, and large enough to provide a year’s worth of food per resident. But securing a spot on these safe, underground villages doesn’t come cheap.

Mr. Hall’s doomsday resort provides a penthouse – at US$4.5 million – full floor units – at US$3million – and half floor units – at US$1.5 million. The facility is also equipped with full military grade security, including defense measures to protect its residents. Mr. Hall said in an interview that the first silo has already sold out, while the second one is still under construction.

The underground bunker offers roomy condos with many luxury amenities. There’s a rock climbing wall, general store, dog walking park, and an aquaponic farm. The complex is also fitted with a spa area, swimming pool, cinema, gym, lounge bar, shooting range and a medical facility. Plenty of game tables (football and table tennis), as well as game machines will o stop residents from getting bored after surviving the catastrophe. Access the company’s website to find out more details.

Are you worried about the possibility of a nuclear war? You probably don’t think about it on a daily basis. That’s why some of the statements provided by the representatives of Survival Condo may sound outlandish.

“In the event of a major disaster, economic collapse or whatever the future may hold, there is one common concern that Larry and his tenants share. And that is the ability to protect themselves and their families when the government is no longer able to do so.”

Even though the future tenants of the Survival Condo currently live in states across the U.S., all of them have set up plans to quickly travel to Kansas in the event of a major disaster. According to one resident, the price of the bunker was not that high. It’s a bit more expensive per square foot than a high-end condo in New York, but the Survival Condo Resort provides its customers with something invaluable: security and peace of mind.

Vivos is another company offering nuclear bunkers to wealthy residents. Located in South Dakota, U.S., it consists of 575 military bunkers. The ultimate purpose of the complex is to accommodate approximately 5000 people. A spot in the bombproof facility costs between $33,000 and $261,000, and it comes with luxury amenities. The underground village includes gardens, a cinema, spa, gym, classrooms, and a doctor’s surgery. The company also offers a “modern day Noah’s ark” facility in Germany. This particular shelter includes 34 properties, as well as a tram network to transport residents within the underground village. The bunker comes with coffee shops, restaurants, game rooms, swimming pool, and a cinema.

So, what is the best way to go if you could buy your way into any old Cold War facility converted into an underground doomsday bunker? Luxurious and opulent, these survival quarters have all the comforts of modern life, protecting its dwellers from any deadly radiation or potential threat. If you’re interested in surviving any mass destruction, here’s where you can live out your post-apocalyptic life. That is, provided your pre-apocalypse wallet can handle it.

The Oppidum is a secret billionaire bunker in the Czech Republic. According to their website, it is the “largest billionaire bunker in the world.” Located in a secret spot in the Czech Republic, the Oppidum is a converted Cold War military bunker. The facility has been repurposed since its glory days in the 1984. Nowadays, it serves as luxury condos for survivalists with pockets a little too deep. If you feel burdened with doomsday paranoia, as well, you can buy a room in The Oppidum. The underground resort (which takes about 323,000 square feet of countryside) focuses on spacious, post-apocalyptic elegance. For a certain price, of course.

If you’re looking for something more affordable to survive the end of days, The Vivos Group is the choice for you. The company has built a very secure nuclear bunker in Indiana, and it sells its spots for about $35,000 per person. For kids, the price tag drops a little lower to just $25,000. According to their website, Vivos reserves its right to up the prices in case of an imminent apocalyptic event. Reserving space in the vault could go as high as $1,000,000 – and they’ll accept gold bullion, if you have it. While not nearly as opulent as The Oppidum, the Vivos quarters are comfortable and fully-equipped. There also is a large theater seating area next to the dining area. It’s fit for relaxing, watching prerecorded TV and playing all kinds of board games.

As we’ve already talked about this particular project, we will only add a couple of details. This luxury complex sits underground in what used to be a missile silo in Kansas. The facility has the capacity to sustain 75 people for about 5 years. Therefore, its exclusive prices are not for the faint of heart. The cheapest accommodations at this nuclear bunker start at $1,500,000. However, they do include high-tech features like LCD screens that mimic natural sunlight. The outdoor “simulated view” windows also reflect the various times of day, from sunrise to sunset.