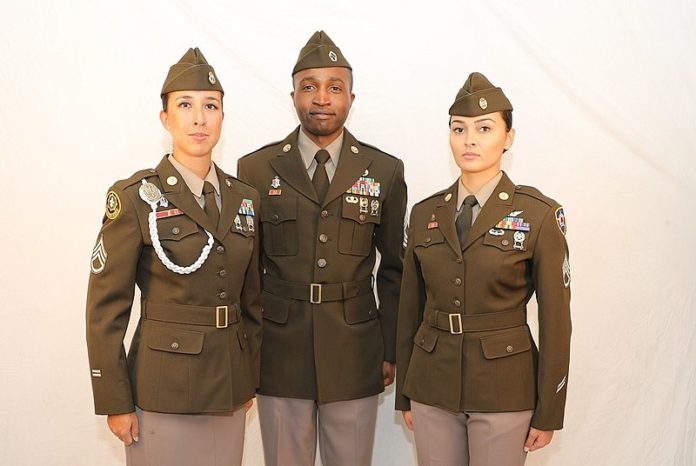 While we look to the military with appreciation and respect, you can also look to them for style inspiration.

There is a lot about the military we can appreciate. We can appreciate their commitment to service and duty. Many are impressed by their training and discipline. Others are moved by their quiet resolve and willingness to stand up for their beliefs.

Yet, one thing we don’t often give the military men and women of the world enough credit for is being style icons. This may seem like anachronism, because in the military, everyone dresses the exact same way. Yet, from rarely worn dress uniforms to their camouflage battle dress uniforms, the military have been influencing our style for years.

What We Think of When We Think Military Style

Take the pea coat. For decades, this sensible blue, wool coat for mariners has been a staple of style. Yet, even though it has a history dating back to the 18th century, this coat was originally designed and worn by European sailors.

After the American revolution, the blue wool pea coat became the standard-issue winter coat to sailors in the America Navy. Sailors still get this item today. There are other versions, just as the longer Bridge Coat and the Reefer jacket (which isn’t a coat for cannabis smoking) with its gold buttons and epaulets. Still, the pea coats that are still fashionable today, owe their military forebears.

Maybe the casual fashion connoisseur doesn’t realize the history of the pea coat and other fashion staples that have their origin in military dress. When people tend to think of the intersection of military uniforms and fashion, our thoughts often go to the anti-Vietnam protests of the 1960s.

Soldiers who returned home and were against the war, which unlike today’s volunteer military was comprised of drafted men, wore their uniforms during peace marches. The way they combined their military uniforms with their long hair, bandannas, and jeans, is one of the iconic looks of the time. Yet, there is far more to military style than simply mixing and matching actually uniform pieces with civilian fashion.

So many commonplace fashion staples have their roots in military dress. For example, we owe the prevalence of the white T-shirt to the Navy as well. Bomber jackets and aviator sunglasses were born out of the Army Air Corps (which later became the U.S. Air Force). The British Army had their influence on global fashion as well. Just ask James Brudenell, the Seventh Earl of Cardigan. A Major General in the British army, Brudenell is credited with popularizing the cardigan sweater.

Another fashion staple, the Trench Coat, was created around the same time during the Crimean War. One of the most famous battles of that war is the Battle of Balaclava, which also gave a name to the balaclava. Finally, the French military are credited for popularizing the necktie during the Thirty Years’ War in the 17th century.

There is no denying the influence military dress has had on civilian fashion, yet despite how much of it has been adopted, people still like explicitly military looks. The late King of Pop, Michael Jackson, frequently wore dressy, military-style jackets, complete with flashy epaulets. These were looks that no mere civilian could ever pull off, but they became a staple of Jackson’s look later in life.

Other celebrities love wearing military-influenced clothing, whether it be simply a pair of cargo pants or a jacket or over-shirt made to look like an Army battle-dress top. Anything camouflage (at least, anything that doesn’t show prints of leaves and twigs) is inspired by military dress as well.

Yet, today’s military fashion is less about appropriating Army surplus clothing and more about adapting military-style clothes to civilian fashion. For example, in the photo above, everything the model wears is adapted from military style but fashioned for civilian use.

Her shirt is a take on the olive drab dress shirt that many in the U.S. military wear, while her khaki shorts are more like the pants worn by civilian contractors, themselves adaptations of military uniform pants. Her boots also look like military boots, yet their cut, polish, and style suggest that they were designed more for looking great than actually trekking through the wilderness. Finally, she caps off the look with a pair of dog tags (complete with black rubber guards to keep the tin edges from burning your skin in the desert) and U.S. military canteen.

While military fashion is a great way to add to your current wardrobe, nothing beats a piece with a personal connection.

What’s great about actual pieces of military fashion is that they are really well-made articles of clothing. From the boots to the berets to the jackets, they are designed to be tough and do their job. So, it makes sense to grab an article or two of actual military clothing and put them into your fashion rotation. While you can find them at any surplus store, don’t be afraid to hit your veteran friends and family.

Usually, recently separated veterans want to get rid of these things when they get out, and they often have more than one of each item anyway. So, a military jacket is a cool piece of fashion, but your friend’s or mother’s jacket is that and a sentimental reminder of your connection with that person. These are the best bits of military fashion because of that connection. Fashion is a form of artistic expression, and something like this is a statement both in the way that fashion normally is and as a tribute to a loved one.

What do you think? Do you have a favorite piece of military fashion? Tell us, along with your thoughts, reactions, and experiences in the comments below. Don’t forget to share the article on social media if you liked it.