Be careful what you think!

...at least while wearing MIT’s newest device. The futuristic, although uncomfortable looking, device is worn behind the ear and along the jaw until it meets the skin just under the wearer’s bottom lip. While you thought you got rid of headgear when your braces were taken off, MIT has developed a new use for it.

What does this device do anyways? 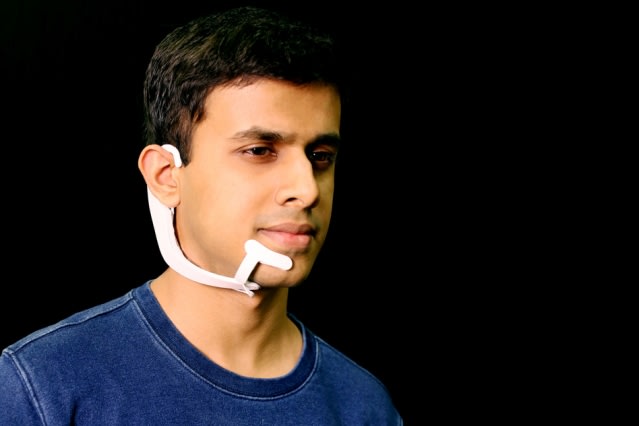 The device transcribes your thoughts. You read that correctly. It’s not quite that simple, but more or less, MIT’s innovative development brings to life the words that its wearer internally verbalizes but does not actually voice.

How is this possible?

The computer interface utilizes electrodes on the face and jaw that pick up on neuromuscular signals. These signals are generated by our internal dialogue, or verabalizations. Upon receiving signals, the electrodes then transmit this data back to an artificial intelligence system that has learned to associate specific signals to assigned words.

It doesn’t stop with just the electrodes though. There are also bone-conduction headphones which analyze the vibrations received in the bones of the inner ear. Without obstructing the ear canal, the headphones send the signals to a computer that further distinguishes words.

The craziest part about the technology though? The signals are normally undetectable, and you don’t even have to say the words aloud -- just say them in your head.

What is this sorcery, MIT?!

While this technology is certainly novel and ground-breaking, the concept behind it is likely well-known to you. Subvocalization is the act of saying words silently in your head. For instance, you do this every time you read the words of a page aloud in your head.

With the dawn of artificial intelligence and machine learning has come a viable way to marry these with subvocalization. Thereby, a system by which we communicate with computers, smartphones, watches, machines, and more emerges.

​“The motivation for this was to build an IA device - an intelligence-augmentation device. Our idea was: Could we have a computing platform that’s more internal, that melds human and machine in some ways, and that feels like an internal extension of our own cognition.”

It’s safe to say that they certainly accomplished this amazing feat! In it’s short lifetime, the device has successfully navigated a Roku and report a chess opponent's moves to in turn give counter moves. Keep in mind, all of this was done without a single word being muttered!​

Where does it go from here?

Despite being preliminary, it goes without saying that MIT will continue to adapt and develop this technology to improve comprehension, size, and design.  Future enhancements will likely include downsizing the interface to be more user-comfortable, expansion of vocabulary, signal interpretation capabilities, and more.