It’s one of our utmost pleasures to tell you all about the best luxury cars our favorite brands release on the auto market. Today, our undivided attention turns to the Porches 911 2017, one of the newer releases that are sure to blow your mind. Like any other car that’s been updated but not fully redesigned, the 2017 Porsche 911 Carrera features the usual scars of midcycle fiddling.

For instance, it comes with new headlights and taillights, and a new touch-screen dashboard display. However, those small changes in appearance matter not to us. In fact, those are just infinitesimal flickers in a majestic night sky compared to the biggest improvement of the new 911.

In order to get the bigger picture, we must peek under the engine covers of the Carrera and Carrera S. There, next to the familiar flat-six engines, you’ll see twin turbochargers; when you close the lids, a script “Turbo” badge is visible. So let us dive into it: One of the best luxury cars of all time is about to spill all its secrets to you.

If you want to get a sneak peek at the Porsche 911 R, watch the YouTube video below; for four minutes, you’ll be glued to your seat, mesmerized by the beauty of this sports car.

Packing the Best of Specs

Thanks to the 6-speed sports transmission and its 500 horsepower (368 kW) 4.0-liter flat engine, the 911 proudly takes its spot in the tradition of its historic role model: the road-homologated racing car of 1967. The 911 R is part of a limited production series (the R stands for Racing) and it has already proved its luxurious specs in the Targa Florio, rallies, and world record runs.

Just like its legendary predecessor, the new 911 R comes with a systematic lightweight construction that offers it an unfiltered driving experience with maximum performance. This particular limited-edition model of 991 units weighs about 1,370 kilograms, which makes it the lightest version of the 911 so far.

The manual sports transmission and high-revving six-cylinder naturally aspirated engine prove once again that Porsche is committed to special high-performance sports cars. Manufactured in the motorsport workshop, the 911 R is a natural extension of the spectrum of high-performance engines, taking its place next to the motor racing models 911 GT3 and 911 GT3 RS.

At the rear of the 911 R works the six-cylinder flat engine; its displacement of four liters reminds of the familiar 911 GT3 RS. The racing engine delivers 500 HP at 8,250 rpm. From a standing start, the rear-engined car reaches the 100 km/h barrier in a surprising 3.8 seconds.

To keep with the overall puristic character of the vehicle, the lightweight 911 is available exclusively with the six-speed sports transmission. Short gearshift travel emphasizes the satisfying active driving experience as the 911 R reaches a maximum speed of 323 km/h.

What about the base 911 Carrera and its speedy Carrera S sibling? They have allowed us to enter a brave new world in which our cars have given up natural breathing in favor of forced induction. However, this was no news seeing that the Porsche was expected to drop the Carrera duo’s naturally aspirated flat-sixes and replace them with turbocharged versions.

Still, now that the inevitable has happened, we can’t help but mourn the loss of Porsche’s signature and warm-sounding non-turbo flat-six engine. But that’s all we’ll say, because the new engine, basically shared by both the Carrera and Carrera S, is nothing to complain about. It’s a 3.0-liter twin-turbocharged ball of pure mechanical fury.

Any visual giveaway of the turbos is rather well-hidden; new exhaust outlets, a pair of 911 vents in the rear bumper, and a retro cooling panel on the rear deck are the only signs. A quadrant of LED lamps for each headlight and taillight is standard – and Porsche’s new lighting signature.

The interior and chassis of the new Porsche 911 2017 have also experienced some functional improvements. Thanks to the new touchscreen infotainment display, owners can benefit of Apple CarPlay integration, Google Earth, and Street View. Familiar touch response – such as pinch, pull, and swipe – has also been included. The previous screen lacked all of these features; it also looked dated and was the opposite of user friendly.

What’s the Big Deal about Turbos?

It’s one of the most frequently asked questions when it comes to the new Porsche 911 2017. After all, turbos endowed the Porsche 959 with superpowers, gave the Lotus Esprit the edge to star in Bond movies, and turned the Buick GNX into a blue-collar dreamy car.

In a few words, turbos are little snail shells of magical power, but their thrust give engines quite a different feel than naturally aspirated engines. Not to mention that turbos need to build pressure before they can provide power. Consequently, drivers can experience a bit of a wait before the full thrust. Remember the old 911 Turbos? They really made you wait, and they weren’t exactly subtle when they finally hit.

But trust Porsche to figure out a way to fix the turbo lag and smooth out the hit. It does the job better than just about anyone else on the market. That’s part of the reason why the 3.0-liter twin-turbo engines built into the new 911 Carrera and Carrera S are stronger than the non-turbocharged engines they replace. And – surprisingly – they’re nearly as responsive!

To Keep in Mind

The Porsche Active Suspension Management (PASM) is now standard on every Carrera. The previously optional active dampers lower the car’s height by 0.4 inch while being keyed into a brand new steering-wheel-mounted drive-mode selector. The latter is available only on models featuring the Sport Chrono package.

The selector relies on the specs of the 918 Spyder and it includes Normal, Individual, Sport, and Sport Plus settings. Depending on which of the options you select, these alter the settings for PASM, the transmission (only on PDK-equipped cars), exhaust, and the engine stop-start feature.

Like any other modern vehicle, the 2017 911 also comes with improvements that some say fall in the category of ‘I Don’t Care, It’s Boring.’ For example, the new Porsche has new safety features like blind-spot monitoring and post-collision braking, as well as a built-in coasting feature for the adaptive cruise control (also available on PDK-equipped cars only).

Feel free to file these enhancements under the same heading as everything that’s not new with the twin-turbocharged engine. As we already said, the updated engine is the new 911’s most important change. Well, that and the newly listed prices.

Given the added power and standard equipment that goes into each of these models, we can hardly argue with these price increases. Will you miss the naturally aspirated flat-six? Or are you eager to embrace the sweet “Turbo” badges? Talk to us in the comments below.

Yet again, everything came back into play with the latest Porsche series. It’s about a new benchmark, a sports car that has never been created in this form. This line is meant to return the owner back to day one, celebrating the Porsche tradition. At the same time, it represents the new step towards the future, attempting to create the best 911 of all time. Check out these amazing pictures of the Carrera models provided by Porsche itself. 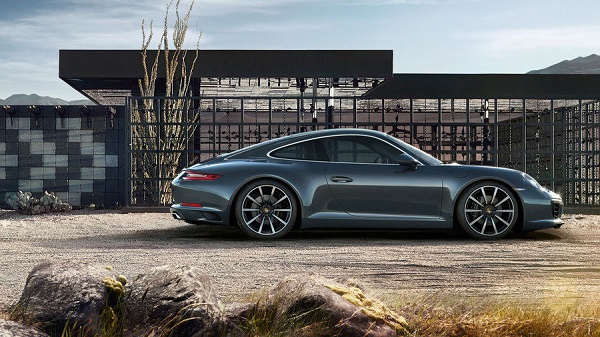 You might have been skeptical when you first read the title of this article, but hopefully, the information we provided convinced you that the Porsche 911 2017 is one of the best luxury cars ever made. You don’t have to be able to afford it to understand the kind of power and thrust it brings. It just flies on the track!