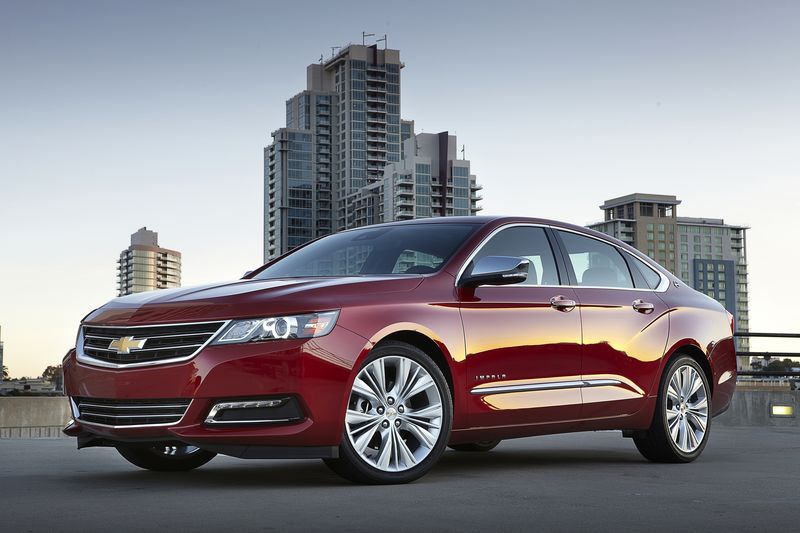 General Motor’s volume brand, Chevrolet, is an immensely versatile manufacturer. Catering to all sorts of drivers, it sells everything from small cars – like the Spark and Sonic – to sports cars such as the gorgeous Camaro. You can even buy trucks like the Siverado, if that’s what you need! Even though it’s a volume brand, you can also buy Chevy luxury cars that compete with some of the more high-end carmakers.

The Malibu family sedan may be one of bestsellers, but thanks to this year’s update, it’s so much more than just a family car! And we can say the same thing about the Equinox and Traverse crossovers. Chevrolet has come a long way, and the all-new seventh generation Corvette stands as proof. From improved efficiency to better engines, the brand’s models have started to exceed expectations. Today we’ll talk about some of the best Chevy luxury cars and what sets them apart in the leisure sector.

Chevrolet Division of General Motors Company – colloquially referred to as Chevy – is an American automobile division of the American manufacturer GM. Even though the brand is currently under the GM umbrella, it started as the Chevrolet Motor Car Company on November 3, 1911. Louis Chevrolet and ousted General Motors founder William C. Durant were the ones to start the company and create a legacy for the American auto market.

A reverse merger occurring on May 2, 1918 helped Durant to acquire a controlling stake in General Motors. He used his founding position at the Chevrolet Motor Car Company to propel himself back to the GM presidency, which led to his second ousting in 1919. Durant was replaced by Alfred Sloan, who picked Chevrolet brand to become the volume leader in the GM family. He is the famous creator of the slogan “A car for every purse and purpose.”

Today, Chevrolet sells mainstream vehicles which compete mainly with Ford’s Models. The rivalry is due to the similar design created by both carmakers. By 1929, Chevy had overtaken Ford as the best-selling car in the United States. Chevrolet produces and sells a wide range of vehicles, from subcompact automobiles and medium-duty commercial trucks to sports vehicles.

Given the prominence and name recognition Chevrolet enjoys as one of the GM global marques, Chevrolet (Chevy or Chev) is sometimes used a synonymous with General Motors itself. Even though it continues to create affordable cars, the company is also upping its class to create more luxury models. Below you’ll find some of the best looking and powerful Chevy luxury cars designed by the brand so far. We’ve also included some of the 2017 new releases.

There’s a reason why this sports car has captivated enthusiasts and casual drivers alike. Its incredible technology and precision performance will surely render your expectations obsolete. There’s no way around it: The mighty Corvette is truly capable of competing with the world’s greatest sports cars. With a 6.2-liter V-8 creating 455 hp and 460 lb-ft of torque, you can now opt for an eight-speed automatic in addition to the standard seven-speed manual. Shedding its unrefined reputation, the Corvette features an interior deserving of its stature.

The Grand Sport model is a winner, combining the LT1 V-8 with the Z06’s chassis hardware and superb bodywork. It’s a bully which goads others into street fights they can’t win – the kind of car that can start a brawl among friends. Nothing in the price range of the Corvette comes close to matching the performance numbers it generates. When you add the rumbling engine (unleashing 460 horses), you see why it propels the GS to 60 mph in 3.9 seconds and. All of its amazing specs combine to quite possibly the best performance value on the market. The car’s might baked into the Grand Sport sells for a $66,445 base price. 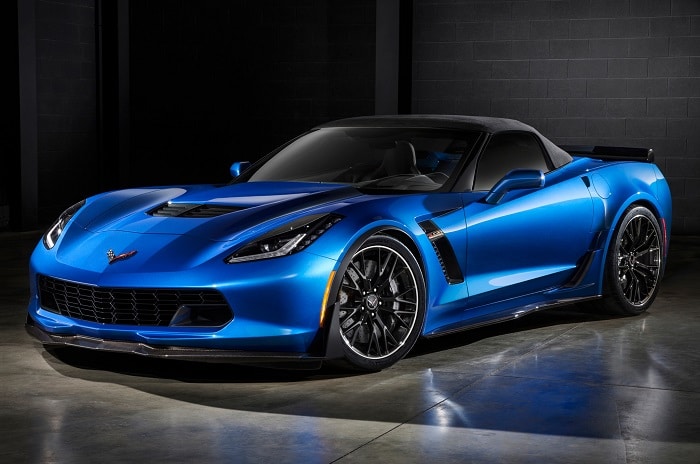 Buyers have been shunning small cars for the past few seasons, so we can’t really blame Chevrolet for trying to keep up with the trends. Its most notable attempt is turning its tiniest model, the Spark city car, into a pseudo-crossover. The Spark Activ is the new trim level, taking the inexpensive and cheerful Spark and adding the requisite bits of SUV-like trim. Chevy’s intention is to create a supposedly more “adventurous” appearance, at least when it comes to highly suggestible customers.

But the 2017 Spark Activ does have a few redeeming specs that helped it make it on our list of Chevy luxury cars. More specifically, it has a different grille shape with larger fog lights, a 0.4-inch-higher ride height, silver rocker-panel moldings, and black plastic over the wheel wells and on the bumpers. The faux skid plates front and rear complete the look, offering us the final shape of the Spark Activ. However, in spite of the changes, the model is still front-wheel-drive only and comes with the same 1.4-liter four-cylinder engine, 98-horsepower as all other Sparks.

Are you not satisfied with the four- and six-cylinder variants of the Chevrolet Camaro? Do you crave even more power? Then perhaps it’s time to have a look at the V8-powered Camaro SS. Currently holding Camaro’s top trim status, the SS might soon be overtaken by Chevrolet’s ZL1 and Z/28 models. Until then, the SS is the proof that the Camaro is staying true to its decades-old formula. It packs a Chevrolet small block V8 underhood, but not the Chevy small blocks of yore. The latest Camaro SS’s 6.2L V8 also packs the latest technologies, including variable valve timing, direct-injection, and active fuel management.

Consequently, the Camaro SS is more than capable to generate 455 horsepower and 455 lb-ft of torque. The standard Camaro SS comes with a six-speed transmission, but you can also have the optional eight-speed automatic. The SS equipped with the available eight-speed auto is a total beast, accelerating from 0-60 in just 4.0-seconds. But don’t let the blazing performance scare you. The Camaro eight-speed can return 18mpg in the city and up to 28mpg on the highway. 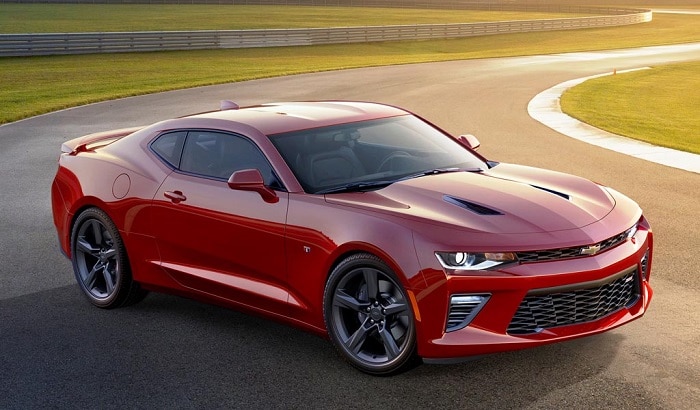 Have you ever wondered what happens when you combine the sophistication of a luxury sedan with sports car performance? The answer is the 2017 Chevrolet SS. On the surface, it’s among the most American thing you’ll see. The SS is a big, comfy, rear-wheel-drive sedan powered by a small-block V-8, but don’t be quick to judge it by its cover. The ho-hum styling is just the cover for track-ready tuning and a mighty V-8. Chevy’s top-of-the-line performance sedan comes with the 6.2-liter 415-hp engine from the previous generation Corvette and the Camaro.

For the standard offering, the SS Sedan features a six-speed automatic and rear-drive. The no-cost option includes six-speed manual, but the standard performance bits combine into an exceptional handling. The front and rear Brembo brakes, the magnetic ride control – these are just some of the specs hiding under its hood. The comfy interior and 4.6-second sprint to 60 mph are just bonuses, contributing to the Chevrolet SS’s line of powerful, rebadged imports from General Motors’ Australian subsidiary, Holden.

The Impala was long relegated to the mundane life of airport rental fleets, but not anymore. Thanks to its newest upgrade, the Impala puts its competition in the rearview mirror. A dynamic and comfortable beauty, it proves the American automaker knows how to make a car for the masses while also keeping the standard to an outstanding level. The Impala combines responsive handling with a cushy ride, stealing the spotlight from some of the best elite luxury sedans. The controls are surprisingly intuitive, without requiring the driver to learn overcomplicated interfaces. The Impala also impresses with enough cabin space to fit five passengers, plenty of elbow and leg room, and an overall smooth ride.

A far cry from the generic, fleet-filling from the 2013 model year, the new Chevrolet Impala has been upgraded in almost every respect. The interior appointments are brand new, as well as the powertrain and the sheetmetal. With enough pinching and pulling, Chevy has managed to transform the formerly androgynous exterior into a sculpted physique. If you squint hard enough, you can almost make out a familial resemblance to the gorgeous Camaro. As you climb inside, enjoy the adventurous bi-level treatment of the dash features, also accented with luxury contrast stitching.

With its high versatility, the Chevrolet brand has managed to conquer the hearts of the most varied class of drivers. From mini-van soccer moms to hardcore sports enthusiasts, the American carmaker makes everyone happy. What are some other Chevy luxury cars you would have liked to see on our list?