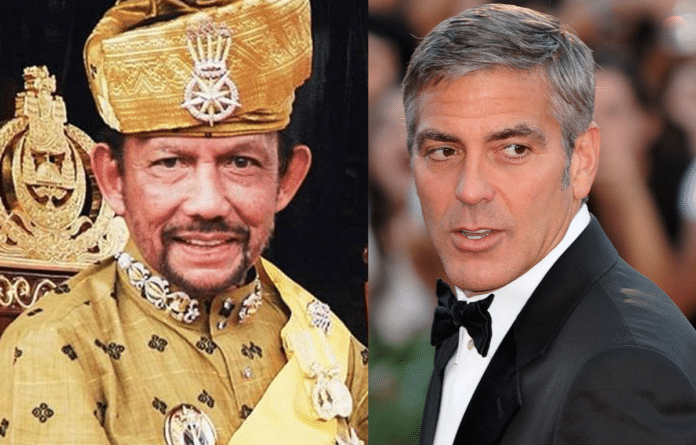 A group of mega-celebrities including George Clooney, Ellen DeGeneres, Barbara Streisand, and Elton John have called for a boycott of hotels connected to a tiny monarchy in Southeast Asia called Brunei.

The little kingdom run by one of the wealthiest men in the world, Sultan Hassanal Bolkiah, has enacted a vicious and draconian penal code based on Sharia, or Islamic law, that calls for stoning people to death. He is the world’s longest-ruling monarch other than Queen Elizabeth II, taking power in 1967.

People who commit adultery or who have consensual sex between men could face the brutal death of stoning, whether the alleged acts happen inside or outside Brunei. The punishment for theft is amputation of limbs, and the penalty for abortion is flogging. All of this is barbaric and reprehensible, regardless of “tradition” or extremist interpretations of religion.

In response, the United States State Department offered what seems a slight slap on the wrist, saying it “opposes violence, criminalization, and discrimination targeting vulnerable groups,” including LGBTQ people. However, we need a direct and robust response commensurate with the severity of Brunei’s policy.

That’s why people like actor George Clooney are lending their voices to a public outcry against Sultan Hassanal Bolkiah. Clooney has called for a boycott to hit the Sultan where it hurts, in the pocketbook. According to the Guardian, the boycott includes hotels operated by the Dorchester Collection luxury chain: three in the UK, two in the US, two in France and two in Italy.

“The Dorchester Collection is owned by the Brunei Investment Agency, an arm of Brunei’s ministry of finance. The British hotels are the Dorchester and 45 Park Lane in London, and Coworth Park in Ascot, Berkshire. Other hotels in the group include the Beverly Hills Hotel and Hotel Bel-Air in Los Angeles.”

“Every single time we stay at, or take meetings at or dine at any of these nine hotels we are putting money directly into the pockets of men who choose to stone and whip to death their own citizens for being gay or accused of adultery,” Clooney said. “Are we really going to help pay for these human rights violations? Are we really going to help fund the murder of innocent citizens?”

Host and comedian Ellen DeGeneres and tennis star Billie Jean King joined Clooney in calling for a boycott of the Sultan’s hotels. DeGeneres shared a list of hotels to boycott on Instagram with the caption:

“We need to do something now. Please boycott these hotels owned by the Sultan of Brunei.”

“Raise your voices now. Spread the word. Rise up.”

Billie Jean King shared the information on Twitter, the day that the atrocities would begin in Brunei.

Music icon, Elton John, his husband David Furnish, and Virgin Group founder Richard Branson previously called for a boycott of the hotels in 2014. Today, Elton, Furnish, and Branson are renewing calls for a boycott. Elton made a series of Tweets to commend Clooney for his statement in Deadline, in which he stood against bigotry and brutality.

“I commend my friend, #GeorgeClooney, for taking a stand against the anti-gay discrimination and bigotry taking place in the nation of #Brunei – a place where gay people are brutalized, or worse – by boycotting the Sultan’s hotels.”

John also pointed out that the boycott is not directed against hotel staff, who he recognizes as gay.

“Our hearts go out to the good, hardworking employees of properties owned by the Sultan of Brunei, many of whom we know to be gay,” John Tweeted.

“We must send a message, however we can, that such treatment is unacceptable. That’s why David and I have long refused to stay at these hotels and will continue to do so.

We hope you will join us in solidarity.”

Among many other celebrity endorsements for the boycott, actor Ron Perlman has been outspoken about Brunei’s savage laws and why he stands by the boycotts.

“I don’t know what else to do. I don’t hold any office. I’m not a legislature. I’m not somebody who can effect real change,” stated Perlman in Forbes.

“I can articulate things and hopefully get other people to understand. And hopefully when enough people understand and enough people start showing this guy [Sultan] they’ll have nothing to do with anything he’s involved in, then maybe he’ll start to get affected by it. It has to be a much more sustained effort that permeates the zeitgeist.”

In response to the boycotts, executives for Brunei’s five-star hotels appear to be trying to lay low and avoid any direct talk about stonings or amputations.

“…executives are lying low at the ‘Dorchester Collection, which manages Brunei’s nine five-star hotels. They deactivated their social media pages and posted a statement on their website’s homepage that is almost as murky as the babble the monarchy shovels out to its hoi polloi. It reads: ‘…this is a political and religious issue that we don’t feel should be played out in our hotels and amongst our 3,630 hotel employees. We’re deeply saddened by what’s happening right now.'”

Meanwhile, Brunei’s foreign minister has downplayed the new penal code beyond belief. The minister announced that the “aim” of the Sharia law is not to punish but to “simply educate, deter, rehabilitate and nurture.”

We hope that you will consider joining Geroge Clooney and friends in a boycott of the Sultan’s hotels. When we travel we have so many great options and one of the best is spending our dollars wisely. We can all help send a clear message to the world about Brunei and its horrific human rights violations.