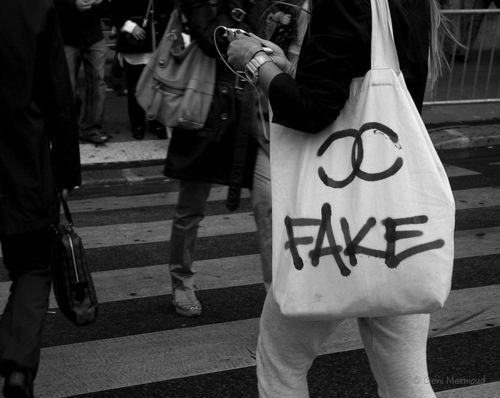 If you’ve ever been to Chinatown you’ve probably seen vendors peddling all sorts of fake designer bags, sunglasses and wallets (in NY, it’s not illegal to buy them, but it is to sell them FYI.) But as a new boom of fakes are being sold via social media and e-commerce, the luxury industry is fighting back.

High-end names like https://www.gucci.com/us/en/” target=”_blank”>Gucci and Alexander Wang are suing owners of sites peddling their counterfeit goods. In fact, last year Alexander Wang sued 459 websites that sold fake bags, shoes and clothes using his intellectual property. Wang was able to https://www.yahoo.com/style/alexander–wang–wins–90–million–in–counterfeit–suit–162948864.html” target=”_blank”>win $9o million as well as gaining authority to the domain names to the fakers’ sites. Most of these originated in China (where two-thirds of counterfeit goods seizures occurred.)

Gucci has recently gone after http://www.refinery29.com/2016/02/103631/gucci–beyond–the–rack–lawsuit” target=”_blank”>Beyond the Rack, a members-only online shop where their fake handbags were being sold.

Stopping the production of knockoff designer goods can be a difficult task, however. Previously, brands have tried raiding and seizing counterfeit products. But, its not very easy to find the source of the fake handbags and other items.

Luxury brands such as Gucci, which are owned by http://www.kering.com/” target=”_blank”>Kering SA, are also fighting in a legal battle against https://www.alibaba.com” target=”_blank”>Alibaba. If you aren’t familiar with Alibaba, they are a global trading company based out of (where else but) China. They feel that Alibaba is responsible for the crazy influx of knockoff designer sales through Chinese e-commerce platforms.

Some brands have had to hire lawyers and investigators to dive into cases of imitation clothing and accessories being sold online. Cases of intellectual-property have increased drastically in Chinese courts in the last decade.

It’s not just these highly luxurious brands that are being targeted by online knockoffs. A few weeks ago, we saw that Birkenstock is pulling its stuff from Amazon because they were “rife with http://www.nbcnews.com/tech/tech–news/birkenstock–ditches–amazon–citing–unacceptable–business–practices–n613496” target=”_blank”>counterfeits.”

With some a buzz swirling around this big designer names taking action against both counterfeiters in China as well as the west, it’s unclear just how many other brands will soon be joining the fight.