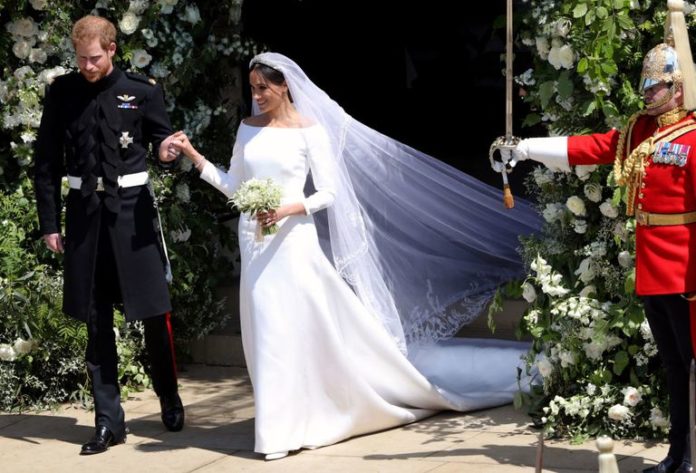 It’s been four days and we still can’t stop talking about the Royal wedding.

In case you missed it, Prince Harry and Meghan Markle married on May 19, 2018. Having the royal wedding on a Saturday went against tradition, as most weddings typically take place on a weekday. That's not all that happened though!

The morning of the wedding brought a big surprise. The Queen conferred a Dukedom on Harry, changing his title. This meant Meghan got a new title too. Their titles are the Duke of Sussex, Earl of Dumbarton and Baron Kilkeel, and Her Royal Highness The Duchess of Sussex respectively. We also need to talk about Meghan’s two fantastic wedding dresses. But we’re getting ahead of ourselves.

The Vows and Reception

The teary-eyed Prince and beaming bride exchanged vows before the Queen and 600 guests at the beautiful St. George’s Chapel. For the royal wedding, Markle wore a clean white boat-neck dress designed by Claire Wright Keller for Givenchy as she walked down the aisle. She also wore Queen Mary’s diamond filigree tiara, borrowed from the royal collection of Queen Elizabeth II. When she approached the altar, Prince Harry told her: “You look amazing.”

Bishop Michael Curry, President of the US Episcopal Church who was invited to speak by Markle, gave the wedding address. “There’s power, power in love” he said. “If you don’t believe me, think about a time when you first fell in love. The world around you seemed to center around you and your beloved.” In an impassioned speech, he also referenced the African-American spiritual song Down by the Riverside, which was once sung by slaves. If you ask us, we are so happy to see diversity reflected in the ceremony.

Following the service, the Duke and Duchess kissed in front of a small crowd of well-wishers before they were whisked away to their stunning chariot - a horse drawn carriage that paraded them around Windsor. The ceremony itself was everything of which a princess dreams.

The A-List Guests and Reception

Later, Harry drove the couple to their reception in a sleek, classic 1968 Jaguar. (Side Note: For a glimpse at some of our favorite luxury cars, click here.) Talk about wedding goals! Among those cheering them on included guests Oprah Winfrey, George and Amal Clooney, David and Victoria Beckham, and Sir Elton John, who later performed at the reception. During the reception, Markle wore a silk gown designed by Stella McCartney accessorized with satin Aquazzura pumps.

The Royal Wedding Couldn’t Have Been More Perfect!

Between the fashion, the culture, and the glamor of it all, we can’t picture a more beautiful wedding. Congratulations to Meghan, Harry, and the royal family.

What was your favorite part of the royal wedding? Leave a comment below.