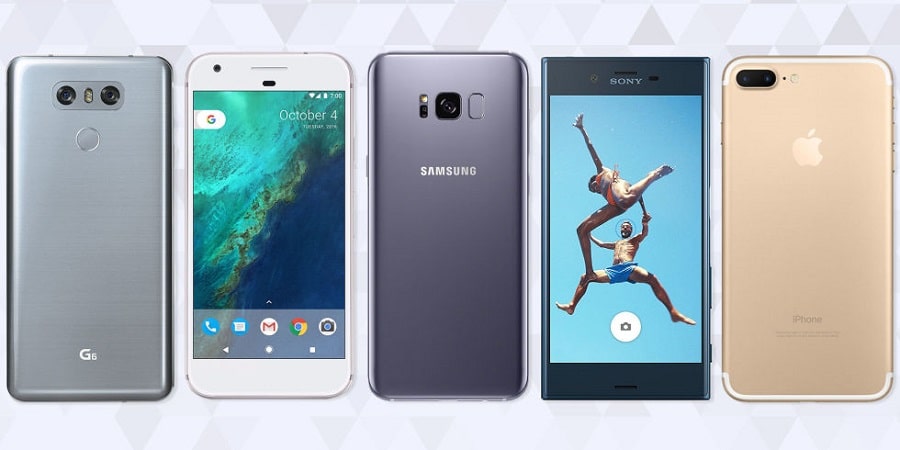 The smartphone market has morphed into one of the most successful and profitable markets at the moment. If you’re thinking of buying a new phone or upgrading your current handset, we might be of help. We’ve listed the best new smartphones – the devices that took center stage at tech events around the world – including the most talked-about Samsung Galaxy S8. With reviews hot off the presses, you can already decide whether you want to buy it or not. Has it made the cut? Read on and find out.

The team at The Lux Authority hopes to help you make a decision by providing a short list of the 5 best new smartphones under the sun. Before you read our reviews, we also offer a quick sneak peek at the three most highly-anticipated smartphones reaching the shelves later in 2017. Then, read the key details you need to choose the best smartphone for you. Our list is in order of preference – the first is the one we consider the best. Judge our choices and tell us if you agree in the comment section below. We took into account the specs, power, design, and, most decisively, value for money.

In the smartphone market, there’s always something better around the corner. This can influence your decision to purchase a phone, because you might want to wait until the next generation appears, when prices on current devices go down. Here are the major phone releases people scheduled for later this year.

We’ve already seen a phone from HTC this year—the $749 HTC U Ultra. The headset is already shipping. Its marquee Sense Companion feature is also available on thanks to the April update. However, HTC may also plan another release in 2017. Rumor has it HTS is working on a follow-up to the HTC 10, which might feature dual cameras, a Snapdragon 835 processor, and touch-sensitive edges.

There’s no doubt the iPhone 7 and iPhone 7 Plus are flagship phones for Apple, but the company might continue to surprise us. The iPhone 8 is reportedly featuring a radical redesign, one that includes an all-glass front. Like the Galaxy S8, the iPhone 8 is also expected to showcase the OLED screen, which eliminates bezels from the front of the phone. All the smartphones Apple introduces in 2017 will include wireless charging, according to rumors. And we wouldn’t be surprised is the next iPhone will shine a new light on augmented reality.

Google’s Pixel has had a resounding success, which is why the tech giant is already planning a sequel. Rick Osterloh has confirmed its successor will appear later this year, but he refused to give a date. According to Google’s 2016 release schedule, the new Pixel will launch in the fall, in time for the holiday shopping season.

The best smartphone money can buy

Undoubtedly the best smartphone on the market, the Samsung Galaxy S8 boasts the genius Infinity Edge display. It takes up 84% of the body, as well as the cutting-edge guts. Yes, this innovative smartphone is definitely candy for the eye, making its rivals instantaneously look dated. The next level of smartphone design, the S8 has it all. The amazing display is backed up by state-of-the-art specs, decent battery life, amazing performance, and an exceptional camera. Combining all of these makes for one of the top performing smartphones today. And it doesn’t hurt that it’s also the best-looking smartphone on the market. We think the 5.8-inch S8 is ideal, but you can also opt for the larger, 6.2-inch display. Both the Galaxy S8 and the Galaxy S8+ come with a few small niggles, such as the weirdly placed fingerprint sensor and poor Bixby implementation.

When it comes to the winning feature of the iPhone 7 Plus, it’s definitely its dual camera. True to its legacy, the iPhone 7 Plus is probably the sleekest, best-looking smartphone on our shelves. Some might frown upon its sheer size – which makes it tricky to hold if you have tiny hands – but it’s not enough reason to deny Apple’s success with this beautiful 5.5-incher. If you’re a devout iOS fan and you’re looking for the best smartphone around, the iPhone 7 Plus should definitely be on your list. While it borrows the design of the iPhone 6S, the new smartphone comes with a more integrated camera bump and rerouted antenna lines. In addition to the new available colors, the casing is (finally) water resistant. The biggest overhaul, however, takes place on the inside. The 7 Plus now packs Apple’s amazingly fast A10 Fusion processor, and it runs iOS 10, the company’s latest and greatest mobile OS.

The battle is really tight between S8, iPhone 7 Plus and Google Pixel – we can’t tell you just how close! While all three are great, the Samsung deserves the title of ‘Best Smartphone in the World’ because of its amazing screen and sleek design. However, that’s not to say the Google Pixel is not an amazing smartphone, still. In some cases – if you prefer a high-quality camera and Google’s smooth software – the Pixel might even steal the show. Google’s handset boasts and excellent camera, tons of power (from Qualcomm’s newest Snapdragon processor), and a great metal-and-glass chassis. And let’s not forget about how the software and virtual assistant work so seamlessly and harmoniously. Google’s has a lot going on with Pixel, which is what makes it a brilliant smartphone. Of course, if you’re particular to larger screens, you can opt for the 5.5-inch Pixel XL, which is identical, apart from size.

LG has been dwindling on the edge of good smartphones, but the G6 has finally made it. It’s good-looking, free from gimmicks, and definitely in the premium category. We love plenty of the features it boasts, including the wide-angle screen, the tiny bezels, and the accessible dual-camera. It is essentially a feel-good handset you will enjoy using. But don’t expect a perfect phone, nor the most efficient one. The skin over Android Nougat leaves a lot to desire, and the feel is less premium than its competitors. The rear casing features a slightly hollow feel that doesn’t spell “superior quality.” It’s not the best Android smartphone of 2017, but you won’t regret purchasing it (especially if you can buy it for a decent price).

The best smartphone from an obscure brand

OnePlus is a brand that seeks to disrupt dominance by the big brands on the market. In 2014, it took the mobile community by storm. Its goal? To become the flagship killer. In our opinion, the OnePlus 3T, the company’s fourth smartphone, might have done just that. The price tag of £399 may be slightly more expensive than what people would like to pay for an unknown brand, but here’s what you’re getting for it. All the mod-cons of the popular handsets have been packed in, including powerful specs, a fingerprint sensor, an HD screen, and a fairly decent camera. And the OnePlus 3T also features a rock-solid software and a genuine premium feel.

So, which one of the new smartphones do you think is the best? Are you an Android fan or do you prefer the sleek design of Apple? Whichever way you incline, we would love to hear your opinion in the comments.