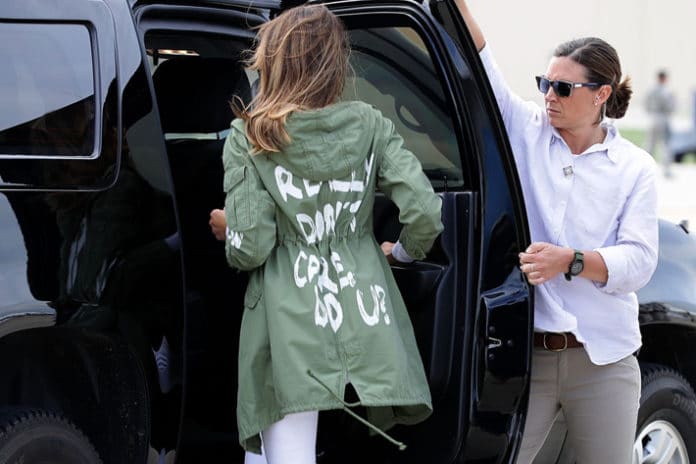 By now, we’re sure you’ve heard something about Melania Trump’s 'I Really Don’t Care' jacket.

It’s stirred up quite a bit of controversy and people are triggered. What do you think about the 'I Really Don’t Care' jacket? We’re here to dig a little deeper and see if this is a political statement or just a really ill-timed fashion misstep. What’s up with our endless fascination with first ladies’ wardrobes?

When Did This Happen?

The First Lady was spotted wearing the jacket when boardeding a plane to McAllen, Texas for a surprise visit to the family immigrant separation crisis area near the southern U.S. border. Articles and photos spread across the web like wildfire.

Then, she wore it *again* when she deplaned at Andrews Air Force Base. For many critics, the jacket’s words seemed to encapsulate the Trump administration’s prior sentiment in defending a policy that separated immigrant children from their parents.

Melania’s spokesperson, Stephanie Grisham insisted in a report to CNN “It’s just a jacket. There was no hidden message.” Grisham even took to the web herself to defend the first lady’s persona. She tweeted: "Today's visit w the children in Texas impacted @FLOTUS greatly. If media would spend their time & energy on her actions & efforts to help kids - rather than speculate & focus on her wardrobe - we could get so much accomplished on behalf of children. #SheCares #ItsJustAJacket"

President Trump also took to Twitter to give his two cents, writing “I REALLY DON’T CARE, DO U?’ written on the back of Melania’s jacket, refers to the Fake News Media. Melania has learned how dishonest they are, and she truly no longer cares!” he wrote.

The Aftermath of the 'I Really Don’t Care' Jacket

Whatever way you look at it, the 'I Really Don’t Care' jacket has provided opportunities for some eager Democrats and companies to capitalize off the movement. The Los Angeles based company, The Giving Keys jumped to brand necklaces with the phrase “I really do care” on them. Wildfang, some private Etsy shops, and private Amazon shops followed suit. Within one hour of the controversial photos being released, the DNC was selling t-shirts with a print saying “We care. We vote. Do U?”

What Do You Think About the ‘I Really Don’t Care' Jacket?

With the amount of scrutiny every First Family is held under, it is hard to believe this is simply a fashion mistake. We want to know what you think. Is Melania Trump trying to say something through her fashion choice? Leave a message and let us know what you think below.