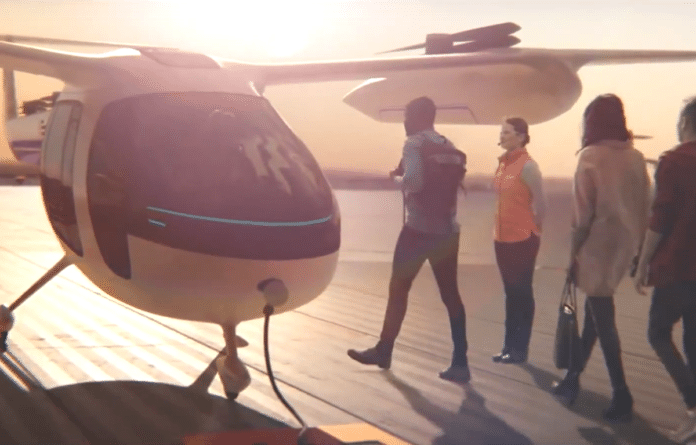 As America’s busy roadways become more and more congested, the luxury of traveling by air seems only more appealing. Instead of getting stuck on the pavement in rush hour traffic, who wouldn’t want to ride in style by private jet or helicopter? While this has traditionally been a choice that only a few people enjoy, say hello to Uber Copter. For only a couple hundred bucks, you too can fly by helicopter and get to the airport in eight minutes, though for now the program is reserved to top loyalty customers.

Fortune reports that Uber began test flights in April from Manhattan to JFK airport and back.

“The documents list the names of Uber employees on the manifest. According to the documents, passengers are to be greeted with:

The New York Times reported that flights in New York City go public starting as soon as July 9, with an average ride cost begins at $200 to $225 a person. Of course, prices will fluctuate based on demand and other factors. Uber says its users will be allowed to book five days in advance.

Up to five people may be able to ride together, but as the program is introduced, only Platinum and Diamond members of the company’s loyalty program can take advantage for now. The company has indicated that they may take Uber Copter to other U.S. cities in the future.

Point to point multimodal journey planning and booking = no stress transport to and from JFK. https://t.co/nhj55m1BKb via @NYTimes

Fortune notes that helicopter rides to airports have been offered in New York City for decades. A new app from Blade Urban Air Mobility Inc. allows anyone to book a ride for flights from Manhattan to three different airports six days a week starting at $195.

“There may be no greater validation of Blade’s strategy than Uber entering the urban air mobility market in New York City,” said Blade CEO Rob Wiesenthal.

.@Uber Copter is set to take off in NYC on July 9th. pic.twitter.com/EKDpld38BI

As part of the company’s “Uber Air” initiative, this is one more way Uber is offering multiple forms of transportation, including electric bicycles, self-driving vehicles, and even scooter rentals. Now the company is trying out ‘copters, but more exciting options are coming.

Secretary of Transportation Elaine Chao and uber-Texas Uber fan Sen. Ted Cruz attended. The timing looks bad for this pitch to industry and government leaders since it comes a day after a helicopter crashed into a high-rise in Manhattan, bringing needed attention to safety concerns.

Nevertheless, many new options for vertical travel are in the works.

Critics of Uber Copter’s approach say it will end up being too expensive for most people to regularly use and won’t solve the problem of increasing congestion on the streets of New York. As America becomes ever-more crowded, the option for affordable, safe and quick travel shouldn’t be only available to a few select business people who can afford city life, but to as many people as possible.

“You have to spend between $1,250 and $3,750 on UberX rides in a six-month period to be able to take a $200 helicopter near Wall Street to what is presumably your private jet or first-class commercial seat,” wrote John Surico for City Lab.

We hope that Uber helps introduce affordable transportation options for average Americans, allowing them to enjoy the luxury of more quick trips by air.

More on Uber Copter and Air Taxis from Engadget below: