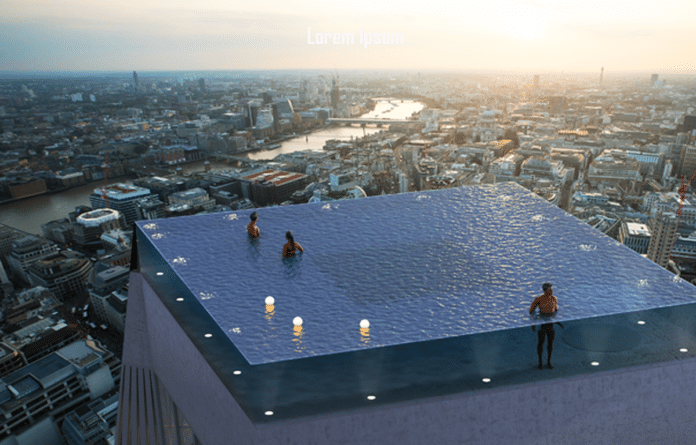 Coming next year, visitors to a new 55-story hotel will get a first-of-its-kind chance to take in the London skyline. The project called the Infinity London pool will be the world’s first 360° infinity pool in the sky.

Compass Pool’s designer and technical director, Alex Kemsley, said the project was highly unusual in more than one way. Not only is it a worldwide first pool design, but the whole building was designed around the pool with the hotel underneath the spectacular pool.

London could be getting an infinity pool 200 metres above the city. ?https://t.co/chvvs7EDqk pic.twitter.com/IbovH977Cu

“Architects often come to us to design rooftop infinity pools, but rarely do we get a say in the building design because the pool is usually an afterthought. But on this project, we actually started with the pool design and essentially said, ‘how do we put a building underneath this?” said Kemsley.

“When we designed the pool, we wanted an uninterrupted view, both above and below the water.”

Check out an animation of the rooftop pool below:

The designers have thought of everything to ensure nothing interrupts the view from the crystal clear water, 200 meters or about 656 feet above the city.

According to Global Construction Review:

“Infinity London” would be a 600,000-litre pool built from cast acrylic and placed on the top of a 55-story building. The light would be transmitted at a similar wavelength to water so the pool would appear clear. The pool would also have a transparent floor, and contain a number of lights that appear like ‘sparkling torches’ at night.”

The designers faced another challenge when they tackled the problem of how to allow access to the pool without ruining the view as well. They decided on a solution based on the door of a submarine along with “a rotating spiral staircase which rises from the pool floor when someone wants to get in or out.”

Of course, we still don’t know how exactly people exit the pool, but why would you want to?

In addition to the spectacular views from the pool, visitors at the hotel will get surreal views of the swimmers floating about above them in the sky. The pool bottom will be transparent, letting the light shine through.

Heating for the pool will take advantage of waste gas from the building’s air condition units and will be controlled by a computer system. That way, swimmers will be able to enjoy the water despite the sometimes grumpy London weather. The computer system will also help prevent water from splashing down on the Londoners below.

Another London pool created waves several years back when the Skypool at the Shangri-La Hotel, At The Shard, London debuted. The 11-meter-long heated indoor infinity pool on level 52 is the highest in Europe.

The Telegraph’s Adrian Bridge described the astonishing views of some of the most famous landmarks in the city.

“OMG. The views. To the left, the pods of the London Eye; panning right, Big Ben and the Houses of Parliament, followed by St Paul’s Cathedral and the Tower of London. In between there were monuments testifying to more recent works of architectural genius: the Gherkin and the Cheesegrater – and yet further (round the huge bend in the Thames), the ever-winking light on top of a Canary Wharf tower still smarting at being eclipsed by the Shard as London’s tallest building.”

See the Skypool below:

Kemsley says the new Infinity London experience takes the Skypool to the next level, but it’s not for everyone.

“Swimming in the SkyPool at The Shard, it’s quite a weird feeling to have helicopters flying past at your level, but this pool takes it a step further. Pop your goggles on and with a 360° view of London from 220m up, it really will be something else – but it’s definitely not one for the acrophobic.”

The Infinity London may be completed by 2020 at an undisclosed location.

See what the pool will look like from News5 Cleveland below:

Across the globe in Dubai, one of the world’s tallest infinity pools is preparing to open. The Palm Tower’s pool will sit on the 50th floor of a 52-floor building with 360-degree views around the Palm Jumeirah building. Swimmers can take in the views from a slightly higher 210 meters, or 688 feet up.

Another infinity pool in Singapore remains the world’s highest at 340 meters or 1115 feet tall, but the Marina Bay Sands pool doesn’t offer the 360-degree element.

Dubai vs London: a battle of the 360-degree rooftop infinity pools seems to be brewing https://t.co/W6pnhqUdRB pic.twitter.com/aXKHcnpEzc